Even though he is bound to his wheelchair, Keith Cavill, one of the stars of the award-winning documentary “Murderball,” maintains he is not restricted to it.

Speaking to an audience of more than 50 people in the Whittenberger Auditorium Friday, Cavill shared his story about being a quadriplegic rugby player.

The event, hosted by the Union Board, featured a question-and-answer session with Cavill following a screening of the film.

Cavill, a 25-year-old New Jersey native, suffered a broken neck after a motocross accident in 2003. His Rehabilitation process and adjustment to life in a wheel chair is documented throughout the film.

After the screening, Cavill spoke candidly about his life as a quadriplegic and his experiences with Quad rugby. He also talked in depth about how he became involved in the filming of “Murderball.”

“I think things happen for a reason,” Cavill said. “They (directors Henry-Alex Rubin and Dana Adam Shapiro) wanted to show someone who was going through the rehabilitation process, and I guess I had a decent enough attitude, but I wasn’t sugar-coating anything.”

Cavill said every quadriplegic and Paraplegic goes through a step-by-step process of learning how to cope with the outside world. He said that after he left rehabilitation, he was shocked at how much he had to adjust to his new way of life. 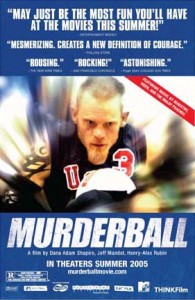 “You start to realize the little things that people take for granted or don’t even think about,” Cavill said.

Cavill said his status as a celebrity has been bittersweet, as he said it helped him spread the word about spinal cord injuries while disproving some stereotypes about people with disabilities. However, he said the status also exposed him to many disingenuous people.

“You meet a lot of fake people, and you meet a lot of real people,” Cavill said. “It definitely has had its ups and downs. I have just geared myself to spreading the word (about the Disability).”

Cavill began his quadriplegic rugby career after the filming of “Murderball” and now plays for his local team, the New York Jets. Cavill said playing quad rugby has helped him deal with his injury and given him a chance to talk with others like him.

Cavill said some of his teammates joked about him being in the film and that his team even nicknamed him “Hollywood” because of his role in the movie. He said although there are people of all different skill levels and physical abilities on the team, everyone still treats each other the same because of the bond they share through their disabilities.

“We’re all equals out there, and when you get on the court, you don’t think about all the things you can and cannot do,” he said.

During the question-and-answer session, Cavill introduced his best friend and teammate from the Jets, Matt Castelluccio, who helped answer questions and give another perspective about the disability.

Castelluccio said IU was the third stop on a six-campus tour this fall. He and Cavill are speaking at colleges to help raise awareness about quadriplegics and help erase stereotypes about people with disabilities, Castelluccio said. He said the tour has been going great and so far their audiences have been quite receptive to their message.

“I think people truly walk away with a new opinion about disabilities,” Castelluccio said.

Senior Laura Burke attended the event Friday because she wanted to see the movie and hear about quadriplegics from someone with the disability. Burke, a therapeutic recreation major, has an internship in a spinal cord injury unit in San Diego this summer and said she learned a lot hearing Cavill and Castelluccio talk about their lives as quadriplegics.

“I really wanted to see the movie, and working with spinal cord injury patients is what I really want to do, so I want to learn as much as I can,” Burke said.