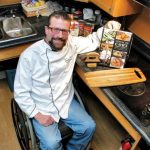 It was a snap decision on a warm August day in 1998 that changed Cory Parsons’s life forever.

A few days earlier, Parsons, a rambunctious 23-year-old adrenaline junkie at the time, rode his motorcycle from Nanaimo to Kelowna to visit family and later meet up with his girlfriend.

The pair went for a stroll along the shore of Lake Okanagan looking for a place to swim. In the distance, the roar of Thunderfest powerboats filled the air, engines straining as their drivers steered them deftly toward the finish line.

Keen to cool off – and show off – Parsons spotted what looked like a deep swimming hole and without hesitation, dove in head first.

It was the last time his legs would ever propel him.

A sickening crunch was followed by moments of confusion. The deep swimming hole was actually a shallow strewn with rocks. The impact broke his neck.

Parsons’s girlfriend, a registered nurse, retrieved him, rolled him face-up and called 911.

Two days of surgery were followed by four days of traction and three months of complete immobility, giving Parsons time to come to grips with the fact he was now a quadriplegic, paralyzed from the chest down with impairment to both his hands and arms.

“It forced me to take stock, to really take a look at myself while lying flat on my back staring at ceiling tiles,” said Parsons. “Before that, I was flying around doing all kinds of things, not having to think too much. I’d been living on my own and had become fiercely independent and here I was all of a sudden, totally dependent. I couldn’t do anything by myself.”

But he wasn’t alone.

While in hospital, Parsons was visited by a representative of the B.C. Paraplegic Association. Together, they talked about Parsons’s new future, his goals, his fears and the details that emerge when a person transitions from being able bodied to being a paraplegic.

Applications for funding assistance were sent out, emotional needs were met, crisis counselling was arranged, models of wheelchairs that would best suit his needs were selected, and renovations to his residence were recommended.

“BCPA has been there since Day 1, and they’ve been in the background ever since helping me,” said Parsons.

And that support remains today.

Parsons was selected as the guest of honour at BCPA’s Spring Equinox Celebration, the organization’s annual fundraiser, on March 31 at the Empress Hotel in Victoria.

Over the years, Parsons has attended the event and was inspired by others who found their way despite being paraplegic, sharing their challenges and accomplishments with others.

This year, 14 years after his accident, Parsons will share his experiences.

“Cory has learned to adjust, adapt and thrive in spite of the challenges of living with a spinal cord injury. Through his story and all he does to give back to the community, he has provided inspiration to people with spinal cord injury on Vancouver Island and across the province that they, too, can lead meaningful and quality-filled lives.”

Despite being paralyzed, Parsons still has the same energy he previously put into pursuits like rock climbing, scuba diving, hand gliding and motorcycles. While struggling with his new life and suffering from “dark days,” he eventually re-channelled that energy into other pursuits.

Today, Parsons continues to work as a consultant for accessibility and personal relations, an ambassador for Canassist at the University of Victoria, gives motivational presentations, works part-time at a fitness centre as a personal trainer and nutrition counsellor, and advocates for sports.

In 2009, he released his cookbook Cooking With Cory, an award-winning effort that features 101 of his favourite recipes.

Inspired by his time in the restaurant business and fuelled by his passion for cooking, Parsons created the book not only to share his favourite food with the world, but to prove that “it is never a matter of if you can do something, it is only a matter of how.”

“My mantra is ‘Yes You Can’ and anybody who has that little voice in their head that says, ‘I don’t know if I can do this’, my response is always ‘yes you can’,” said Parsons. “It doesn’t matter if you’re disabled or able-bodied. I hope that’s the message people glean from what I do.”

It took more than 10 years to collect recipes for the book, available at www.coryparsons.com.

Today, he continues his cooking pursuits, improving his dishes with food taken from his own garden and greenhouse that include artichokes, chili peppers, tomatoes, herbs and oranges. He also hosts a cooking class on Skype to international customers.

In 2009, Parsons also put on a body-building show, as well as becoming the first quadriplegic ever to participate in Nanaimo’s renowned International World Championship Bathtub Race, a gruelling two-hour offshore race that required Parsons and his crew to develop a custom boat.

His life, he says, is full.

“Learning how live with being a paraplegic has been hard, harder than the mountains I used to climb,” he said. “But the support has been incredible, both from BCPA and the local community, and I want to be able to give back.”