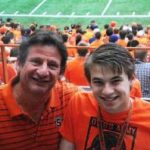 Sawyer Rosenstein was a 12-year-old middle school student in Ramsey when a punch to his stomach by a bully ended his dreams of becoming an actor and put him in a wheelchair for the rest of his life.

It wasn’t the first time Sawyer said he had been victimized. In fact, he documented his troubles in emails to school officials, pleading with them for help. “I would like to let you know that the bullying has increased,” he wrote to his guidance counselor at the Eric Smith Middle School, adding, “I would like to figure out some coping mechanisms to deal with these situations, and I would just like to put this on file so if something happens again, we can show that there was past bullying situations.”

That email was sent on Feb. 9, 2006. Three months later, the punch that brought him to his knees would cause a clot in a major artery that supplies blood to his spine, leaving him paralyzed from the waist down.

Now, Sawyer and his family will be paid $4.2 million to settle his claim against the district. The settlement does not include an admission of liability or fault on the part of the district, his lawyer said this week.

“Without a doubt, this has changed me as a person,” Sawyer said of his ordeal in a telephone interview Tuesday from Syracuse University, where he is a freshman. “I can’t go back and change the past. What I can do is look at what I have now and what is ahead of me. And I have my whole life ahead of me.”

School administrators did not return phone calls over two days seeking details on the school’s anti-bullying policies, how those policies are enforced and how they have changed over the years, most recently since the state enacted a tough anti-bullying law in 2011.

Only school board President John Nunziata responded, offering this comment: “There is a broad range of character education designed to inspire students to act with respect to others. There is a comprehensive and clear policy on how the administration is to deal with all incidents of harassment, intimidation and bullying.” He did not elaborate on that or the settlement.

Sawyer Rosenstein does not agree.

“If you look at how there were many instances of bullying that were never resolved at the schools in Ramsey, that should be a sign that bullying is a problem,” he said. “If they had taken corrective measures in the past, maybe this would have been preventable.”

His parents hope their experience will encourage schools not just to come up with anti-bullying policies, but also to strictly implement them.

“I wonder how many kids cried out for help,” Cheri Rosenstein said in an interview at their home Tuesday morning. “There are many Sawyers out there.”

Sawyer Rosenstein was not the type who got into physical altercations, his mother said, so she was surprised when the boy came home from school on May 16, 2006, held up his shirt and told her that another student had punched him in the stomach — hard enough to bring him to his knees, according to his lawyer, Jeffrey Youngman.

Sawyer said he felt pain in his back but seemed fine otherwise, his father, Joel, remembered.

Two days later, however, the seventh-grader let out a scream from his bedroom, where his parents found him on the floor.

“We picked him up and called an ambulance,” his dad said. “He hasn’t walked since.”

What followed were years of treatment and rehabilitation, including 19 surgeries and a complete spinal fusion. Sawyer also developed severe infections and bedsores and nearly died several times, Youngman said.

He missed almost a year of school, prompting his mother to give up her job as a nurse to care for him. Their home required several costly additions and alterations to become wheelchair accessible, Cheri Rosenstein said.

When Sawyer went back to class, first with an aide and later without one, the toughest part was seeing his attacker every day, his mother said. The other boy had received only a few days of suspension, she said.

The boy accused of punching him was a known bully with a history of violence, Youngman said. But after the Rosensteins filed their lawsuit in Hackensack in 2009, he said, one school official told the lawyer during a deposition that she thought Sawyer was a “complainer.”

The Rosensteins settled their claim against the student for an undisclosed amount last year. Out-of-court settlements are often confidential unless they involve a public entity.

Sawyer was angry, bitter and depressed at times, his mother said. He had just begun his transition to adulthood and independence when the tragedy forced him to depend on others for even the simplest of routines.

He gradually became more and more independent and hardly looks back now, she said.

What made Sawyer’s case unique was that he documented his complaints to school officials about taunting and harassment in writing, Youngman said. On several occasions, the boy went beyond asking for punishment for one bully and urged school officials to be proactive in creating a bully-free environment, he said.

“I couldn’t believe that a child of 12 years had actually taken such action,” Youngman said, but he added that school officials did not act.

Nunziata, the school board president, said the board was scheduled to discuss the settlement Tuesday night. He said he had not been informed of the details.

He stressed, however, that the settlement is covered by the district’s insurance carrier and that no public funds will be spent to cover the payments.

Joel Rosenstein said school officials must be held responsible for such incidents.

“Even with this settlement, it is the insurance company that is on the hook,” he said. “The school is not being held responsible.”

He said the money will help cover the high costs of living in a wheelchair. For example, his father said, Sawyer’s Honda Odyssey minivan, which was modified with hand controls, cost $75,000.

Despite all the challenges, Sawyer remains upbeat about life, Cheri Rosenstein said.

Sawyer is now studying communications at Syracuse, where he is majoring in broadcasting and digital journalism.

An admitted “space geek,” he said he has worked during the summer at the Intrepid Sea, Air and Space Museum in New York City and at the Lower Hudson Valley Challenger Center in Airmont, N.Y. He also has his own podcast on all things space.

“I don’t know who said it, but my motto in life is: ‘Don’t tell me the sky is the limit when there are footprints on the moon,’” he said. “‘Don’t tell me I can’t do anything.’”

They created a computer station — and changed a quadriplegic patient’s...