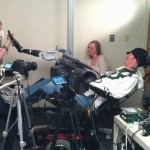 For those whose arms as well as legs are paralyzed by spinal cord injury, no skill is more broadly useful to regain than the ability to grasp and move objects. Researchers reporting in Nature magazine this week say they have devised a new way to get a patient’s hand to grasp a greater range of objects:  by playing recorded brain commands directly to muscle.

For the paralyzed, the technique could provide brain signals a way around the broken spinal cord and allow hand movements more finely tuned to different tasks. The research is part of a broad field of research into “neural prosthetics” and “brain-machine interfaces” that could restore function lost to illness or injury and someday extend normal human capabilities.

Two rhesus moneys, T and J, played a simple ballgame while researchers from Northwestern University and Pittsburgh University listened in on the electrical commands sent to the muscles by the brain and the electrical impulses generated by the muscles of the hand and forearm in response. Recording and synchronizing those two sets of signals to ensure a smooth command-and-response took a lot of ballplay, but T and J were game.

The researchers then effectively paralyzed the monkeys’ right arms by injecting a nerve block in each monkey’s upper arm, thereby cutting their forearms and hands off from messages issued by the brain. Groups of electrodes were sunk directly into three muscles that carry out movement in the hands and forearms — the flexor carpi radialis, the flexor digitorum superficialis and the flexor digitorum profundus — so that researchers could replay the pattern of electrical impulses that had corresponded to the brain signals that commanded those movements.

This “natural coupling between cortical activity and motor output” was no easy task, since the brain signals that cause these three different muscles to contract are issued in three different wave patterns. In a healthy primate, this cacaphony of messages nevertheless results in a smooth movement, and that’s what researchers were looking to reproduce.

“The monkey grasped and moved the ball reliably” when the electrodes fired, the researchers reported. A casual observer, they noted, would have noticed no difference between the artificially stimulated ballplay of the paralyzed monkey and his natural ballplay without the nerve block.

In those with spinal cord injury, muscles sometimes lose their sensitivity to nerve impulses or are stuck in contraction — and in such cases, stimulating the muscles electronically may do little to move them. Also, unlike monkeys who were experimentally “paralyzed,” humans with spinal cord injury are unlikely to get the chance to show the makers of their “neural prosthetic” how they grasp or manipulate an object.

But humans have advantages that monkeys don’t have: They can close their eyes and in response to a command, imagine closing their hand around a small object or opening it to grasp a large one. Researchers may be able to find regular relationships between these different patterns of cortical activity and their motor outputs, and to create prosthetics that smoothly translate a wide range of thought patterns to bursts of muscle-activating electrical impulses. Even after spinal cord injury has disrupted the brain’s mastery over muscles, a well programmed panel of electrodes could restore it.

The Wii and an injured gamer – a happy follow-up