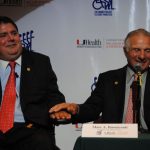 The FDA’s go-ahead makes The Miami Project’s clinical trial to aid against spinal cord injury the only one in the United States.

The Miami Project to Cure Paralysis said Tuesday it has received federal approval to conduct “revolutionary” human trials to transplant a patient’s own Schwann cells, found mainly in the nervous system, to the site of recent spinal cord injuries in the hope that the trials may bring researchers closer to finding a cure for paralysis.

Marc Buoniconti, a quadriplegic and president of the organization, made the announcement with tears in his eyes. The Miami Project — a Center of Excellence at the University of Miami Miller School of Medicine — was founded in 1985 by Buoniconti’s father, Nick, a member of the 1972 undefeated Miami Dolphins, and neurosurgeon Barth Green after Marc suffered a spinal cord injury during a college football game.

“My father made a promise to me that he would find a cure for paralysis and that everyone in wheelchairs would get up and walk again,” Buoniconti said. “We are taking a huge step in delivering on that promise.”

The news of the approval by the U.S. Food and Drug Administration was announced before an audience that included University of Miami President Donna Shalala and a row reserved for wheelchairs.

“Today is about the people sitting in the front row who can’t stand up to applaud,” Green said.

Schwann cells are usually responsible for sending electrical signals through the nervous system, so the hope is it can do the same successfully for the spinal cord. The Miami Project has been working on the concept for more than 25 years, according to a news release.

The FDA approval makes The Miami Project the only cell-therapy based clinical trial for sub-acute spinal cord injury in the United States. The first stage will consist of eight patients, between 18 and 50 years old who have been injured within five days. Doctors will obtain the Schwann cells from the patient’s leg. The cells will be cultured for three to five weeks and then implanted at the injury site, 26 to 40 days after the injury. All procedures will be conducted in Miami at University of Miami Hospital, Jackson Memorial Hospital and The Miami Project to Cure Paralysis.

Alex Tommasino, a quadriplegic investment advisor from Key Biscayne who received an invitation to the conference, said he was excited by the prospect of new information emerging from the trials.

“It’s exciting,” he said. “I can’t wait to see what happens and what the results are on the humans.”

And Shalala welcomed the news, too.

When Buoniconti called the trials “another first-ever for the University of Miami,” Shalala quickly responded: “If I had my choice, this would be it.”