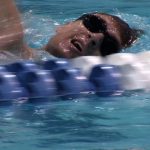 The international multi-sport competition for athletes with disabilities hits London on August 29.

On a September day in Afghanistan last year, Lt. Brad Snyder was running to help a group of fellow servicemen who had been struck by an improvised explosive device.

As he ran, a second IED buried in the dirt exploded — and Snyder ended up losing the sight in both of his eyes.

Exactly a year later, on Sept. 7, Snyder will compete for a gold medal in the London Paralympic Games, an international celebration of athleticism for people with physical disabilities.

Snyder, who took up swimming after his injury to help with rehabilitation, reflects much of the spirit of the Paralympic movement.

“The Paralympic movement really originated from injured service members and veterans, post WWII,” Charlie Huebner, chief of Paralympics for the U.S. Olympic Committee, said to TakePart. “Injured veterans using physical activity as a part of rehabilitation is really how it began.”

In 1948, a doctor in Great Britain was tasked with finding better ways to treat soldiers and civilians with disabilities.

Dr. Ludwig Guttman started a competition for athletes with spinal cord injuries at Stoke Mandeville Hospital. At the time, the Stoke Mandeville Games were comprised of British athletes competing in archery, but the competition has evolved into a global event boasting hundreds of international atheltes and a wide range of sports.

“The Paralympic movement in the United States is honestly in its infancy,” Huebner said. “The movement continues to grow throughout the world.”

The Paralympics, which arrive in London on Aug. 29, are less publicized than the Olympic Games, but the stories of the athletes competing are just as inspiring. In just a few days, about 4,200 athletes with disabilities from 160 countries will descend upon the capital — more than in any other Paralympic Games thus far.

So what exactly are the Paralympic Games? Though they’re sometimes confused with Special Olympics, most Paralympic athletes are not mentally impaired. Instead, they’re competing with a wide range of physical disabilities, such as paraplegia, blindness and cerebral palsy. (Intellectual disabilities have been re-added to the mix after 12 years, but only in swimming, athletics and table tennis.)

South African sprinter and double-amputee Oscar Pistorius, nicknamed “Blade Runner” for his carbon fiber running blades, raised awareness of the incredible athleticism of disabled competitors in this year’s London Olympics. Pistorius, a Paralympian, qualified and fought to compete against able-bodied athletes for an Olympic title.

The Paralympics continues to grow, especially within the miliary community. With more and more service members coming home from overseas, many have injuries that require rehabilitation. While there were a few veterans in the 2008 Beijing Paralympics, far more are competing this year.

“As you can imagine, in four years’ time, there’s four more years worth of injured servicemen,” Rich Cardillo, military sport program coordinator for the U.S. Association of Blind Athletes, told TakePart. “We work to help guys like Brad [Snyder] that have a Paralympic skill set.”

Snyder is one of 20 U.S. active duty military members and veterans who are competing in this year’s games, a number that is unrivaled by previous years. In total, the U.S. is sending 227 athletes.

In recent years, organizations have pushed for more involvement from U.S. military veterans as a way to help them enjoy sports and enhance their lives.

“If there is somebody with a particular skill set, we try and help guide them in this Paralympic ‘pipeline,’ if you will,” Cardillo said. According to Cardillo, Snyder is the first blind Paralympian with a military connection.

After losing his vision last September, Snyder gradually adjusted to swimming again with the help of doctors, Cardillo and local groups.

“For him, losing his sight wasn’t the challenging part,” Cardillo said. “He knew how to swim, so we didn’t have to teach him, but he had to learn how to swim blind.”

Snyder competed in just two swim competitions before catching the eyes of the U.S. Paralympic team, which invited him to swimming trials in Bismarck, North Dakota. At the Paralympic trials this June, he landed the number one spot in both the 400-meter and 100-meter freestyle races. Cardillo has got high hopes for Snyder, and expects him to medal in at least a few of his seven races in London.

“When [these veterans] lose their vision, they think ‘That’s it, I can’t do anything,’ but we give them the opportunity try it,” Cardillo said. “And once they realize, ‘Hey I can still do whatever it is — ride a bike, swim, do track and field — they recognize the fact that I can still do this. It’s just amazing to watch them grow.”

Will you be watching the Summer Paralympic athletes compete for gold? Let us know in the comments.