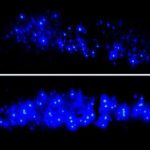 ScienceDaily (Nov. 12, 2007) — Neurons die en masse when the spinal cord is injured or when a person suffers a stroke. Researchers of the Max Delbrueck Center for Molecular Medicine (MDC) Berlin-Buch, Germany, and of Aarhus University, Denmark, have unraveled the molecular mechanism which causes the death not only of damaged neurons, but also of healthy nerve cells.

In animal experiments, they have now been able to demonstrate that neuronal cell death can be reduced when the gene of one the key players in this process is knocked out. The research results of Professor Thomas E. Willnow (MDC) and Professor Anders Nykjaer (Aarhus University) have been published online in Nature Neuroscience. Now they are working on the development of drugs to limit neuronal cell death after spinal cord injury.

After injury, neurons secrete the precursor protein proNGF. (The abbreviation stands for pro-Nerve Growth Factor.) ProNGF binds to a receptor called sortilin, situated on the surface of all neurons whether they are injured or not.

As soon as proNGF binds to sortilin, it induces the lethal cascade. This explains why proNGF not only promotes the death of damaged neurons, but also of the surrounding healthy tissue.

In the embryo, inducing death of neurons is an absolutely necessary process. It keeps the developing nervous system under control. For the adult organism, however, this “deadly activity” is disastrous.

It not only causes the massive death of injured neurons, but also kills the healthy nerve cells. “This shows that neurons not only die because of the initial insult, such as lack of oxygen in stroke. To a large extent, nerve cells also die as a consequence of proNGF’s binding to sortilin,” Dr. Willnow explains.

With a technology for which three scientists in the US and UK have just won the Nobel Prize, Dr. Willnow and Dr. Nykjaer bred mice in which they silenced the gene for sortilin. They could show that in knock-out mice lacking sortilin, most neurons survive spinal cord injury. By contrast, in mice still expressing sortilin on the surface, up to 40 percent of the affected nerve cells are lost.

Dr. Willnow is convinced that proNGF and sortilin are perfect targets for drug development. “If the receptor sortilin can be blocked by a drug to prevent proNGF from binding to it, patients with spinal cord injuries can be treated and damage to neuronal tissue can be reduced,” he says.

Researchers assume that proNGF also induces neuronal cell death in diseases such as stroke, Multiple Sclerosis, Alzheimer’s and Parkinson’s disease. “However, there is no ‘proof of principle’ in a mouse model as yet. That is, we cannot tell if blocking sortilin reduces neuronal cell death in these diseases, too. We are working on this problem, but it still may take a while to find the right answer,” Dr. Willnow adds.

The research Dr. Willnow and Dr. Nykjaer now present in Nature Neuroscience is the result of a relatively short research period. It was not until 2001 that researchers in the US identified proNGF as the cause of neuronal cell death. At that time, the mechanism was still unknown. Only a few years later, in 2004, Dr. Willnow and Dr. Nykjaer were able to demonstrate that proNGF causes neuronal cell death by binding to sortilin.