No traffic fines for research 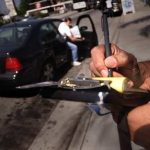 AB 1657, which would devote $1 from certain traffic tickets to fund spinal cord injury research, is well-meaning but misguided. If the state is going to increase traffic fines, the revenue should pay for underfunded basic services.

Who would be so cruel, so selfish, as to deny money for spinal cord injury research? Unless you wish further harm to people who are paralyzed or otherwise disabled by spinal injury, certainly you want Californians to open up their wallets to fund studies, right?

Boiled down to its basics, that is the argument behind the well-meaning but misguided AB 1657, which would tack $1 onto moving traffic violation fines to fund spinal cord injury research. The asserted but questionable nexus between traffic tickets and medical research is that tickets are issued to drivers who violate the law, those violations usually constitute unsafe driving, unsafe driving causes car accidents, and car accidents are a leading cause of spinal cord injury. The bill could as easily have been tailored for brain injury or major organ injury — if those research lobbies had gotten to the Legislature first.

We cannot keep running California like this. Outside interests, even those doing the often heroic work of medical research, can’t look to state taxes, fees and fines to fund their projects. The state’s budget problems are severe, and Californians face deep cuts in services they rightly expect their government to provide. The school year is on the verge of being shortened, courts are stuck in a paper-file era, and jails and alternative sentencing programs are underfunded. If the state is going to increase traffic fines — a big if — the resulting revenue should pay for those and other basic government services.

This bill bears some resemblance to the cigarette tax to fund cancer research in Proposition 29, which voters narrowly defeated in June. Of course Californians would like to cure cancer, and of course it would have felt good to deliver a blow to the tobacco industry. But that can’t be how we do medical research in this country, with Californians tackling cancer and, perhaps, Texans doing heart disease, Nebraskans taking on AIDS and the rest of the country hanging on to their wallets but accepting the benefits. States must pay for their own people and programs, with foundations and, sometimes, federal matching grants funding research. In California we started walking down a different road in 2004 with a state-bond-funded stem cell research infrastructure that has produced little benefit. It was the wrong road. We should turn around, not get further lost.

Any Californian may at some time face a traffic ticket. The fines, surcharges, double fees for construction zones, transaction fees and assessments already have to cover the cost of enforcement and court operations. They can’t cover every need or wish list.