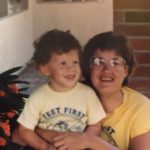 When Debbie Soliz first got injured, she was told motherhood might never happen for her. Now, she dedicates her life to showing other women with spinal cord injuries that anything is possible.

“He learned I couldn’t pick him up,” Debbie Soliz says. “So we fixed it so my son Allan could climb on a chair and climb on my table.” She points to the table attached to her wheelchair, which Allan broke at age 8. “And he would say, ‘mom, this is my place. And I’m not going to stop sitting here until it breaks’.”

Now 64, a social worker in Davis, California for the past 25 years, Debbie is an expert on being a mother with a spinal cord injury, or SCI.

At just 15, she had her accident, daring to jump off a cliff into the ocean at Corona del Mar in 1969. The fall left her a paraplegic, spiraling her from dark beginnings into a bright future as a mother, advocate, and social worker dedicated to perinatal care and women’s reproductive rights.

“I was stunned by my accident and by the disability,” she says. “For 3 years, I was not myself and I decided that I would just stay home and there were no plans for me to finish high school or go to college.” With a push from her mom and the companionship of an SCI rehabilitation group, Debbie became determined to accomplish all the things that she had wanted before the accident: including sex and children.

“We learned about sexuality, not just sex,” she says. “And we learned that we could get pregnant, and I liked knowing that.”

During this time, information available on the risks of childbirth for SCI women were quite extreme. “It all said that you are going to die if you get pregnant, all the information was scary stuff.” But it turned out these risks, put forward as only applying to paraplegics, actually applied to all women. It was a turning point for Debbie.

It changed the course of her professional career. After first obtaining degrees in animal behavior, she switched gears into social work, finding a passion for reproductive health.

Over the years, Debbie has worked with countless women: writing protocols on what to do if a woman comes in with bruises, for example, and figuring out how to maximize the short time a social worker might have with a vulnerable woman to get her the support she needs. But her greatest role has been as an advocate for SCI women giving birth.

In 1984, she had her first child, and in 1987, she had Dani. Getting pregnant was no easy task, but Debbie and her partner were patient, and she was able to have two natural births.

Debbie reflects on giving birth as an SCI woman. “The most dangerous time is when the baby is crowning. I can’t push, physically I can’t bear down. I can only let the uterus do its work.” Both births went so fast because of this: no pushing meant that birth was like a cannon being shot. “The way [my partner] saw his son being born was through a camera, because in 90 seconds Allan was born.”

And just as Debbie adapted to her children, so did Allan and Dani adapt to her.

For example, because of her accident, Debbie has her hands in splints to help with grip and hand function. While feeding Allan a bottle as an infant, her hand would turn sideways before she could make it all the way to his mouth. He learned that this would happen and would turn his head lean forward so that the food would fall in his mouth. Her partner also made a special crib so that and Debbie could take her children in and out of the crib herself. Daily hacks in combination with intuitive children made all things possible.

Having small children wasn’t an ordinary experience for Debbie, but parenting, says Debbie, transcends disability. “There’s a feeling that [disabled women] cannot parent, that they physically can not do it,’ she says. “But parenting isn’t about physical care. Parenting is about teaching, loving, playing. So many things that I could do, that shape a child far more than diaper changing.”

Bringing The Promise Of Stem Cell Research A Step Closer To...