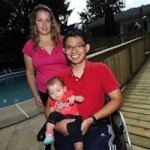 His doctor can’t say yet if he’ll ever walk again, but 26-year-old Anh Tuan Nguyen doesn’t worry about the future. After falling more than 20 feet from a ladder and seriously injuring his spine two months ago, he just takes things one day at a time.

“It’s changed my life a bit,” Nguyen said thoughtfully, looking at his six-month-old daughter playing on the rug in front of him, “But not too bad.”

Nguyen’s had to learn to get around in a wheelchair, he’s had to stop working as a machine maintenance technician at a local foam factory and put his hobbies — cycling and remote-control car racing — on hold, but he and his wife Krystal Nguyen, 27, are busy getting this new phase of life in order with help from their families and a little unexpected fundraising.

On June 8 this year, Nguyen was cutting a limb in the tree in front of their house — which they had bought just the month before — standing 20 feet up on a ladder. The heavy branch he was cutting swung the wrong way and knocked him off the ladder, into another branch and then to the ground.

“I was watching from the window holding the baby,” Krystal said. “As soon as he fell, he said, ‘I can’t feel my legs.’”

The shock is likely what kept him from losing his wits or feeling any pain, Nguyen said. “I knew I broke something,” he said. Nguyen said he remembers thinking, “As long as I’m awake, it’s okay.”

The fall severed two nerves in Nguyen’s lower spine. “The surgeon was beside himself,” Nguyen’s mother-in-law Angela Cross said, recalling the surgeon’s expression when he was looking at the X-rays.

Nguyen underwent a 13-hour surgery in which eight metal plates, 16 screws and two rods were inserted into his back. He then spent almost two months in physical rehabilitation.

So far, the family says, there are positive signs. Nguyen said he can feel something in his legs. It’s nerve pain — he likened it to having your legs punched repeatedly — but it’s a clue that the nerves are still firing out signals.

And Nguyen can still hold baby Vivian, who has been a real source of hope in the past months, Krystal said.

According to a 2010 report by the Rick Hansen Institute, which supports spinal cord injury research in Canada, more than 85,000 Canadians are living with a spinal cord injury. Just over half of those people’s injuries were the result of trauma like Nguyen’s unexpected fall from the ladder.

Nguyen and his doctor are exploring the possibility of stem cell research. There is growing interest among paralysis researchers in the potential of stem cells to help help regenerate the nerves in the spinal cord so it can send signals again from the brain to the legs. Nguyen’s doctor said he would be a great candidate, Cross said.

In the meantime, Nguyen and his family are focusing on physio and the finances that go into making a home wheelchair accessible.

Krystal is on maternity leave from her job as a medical lab assistant, and Nguyen is on sick leave – that doesn’t provide much in terms of extra income for home renovations.

Family friends with construction experience helped install the wheelchair ramp at the back of the house and re-do the bathroom shower stall, but the couple must change cars to one that can be outfitted with hand controls so Nguyen can drive it, and they would like to install a stair lift to the basement rec room, Krystal said.

Nguyen had 18 hours of physio per week as an inpatient at Malden Park last month and he would like to keep up with it, he said, ideally with some physio at the Detroit Medical Center’s Rehabilitation Institute of Michigan which is known for its work with spinal cord injury patients, getting them out of wheelchairs and on their feet. But without extended health benefits, Nguyen can get just a few hours of physio per week right now.

As if reading their minds, family and co-workers have already stepped in to organize fundraisers, including one this Sunday at the Bull and Barrel and one at the end of September at Harrow’s agricultural building, where Krystal’s father and his fellow Elvis tribute artists will put on a show.