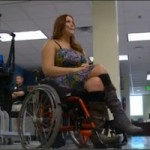 SALT LAKE CITY – Technology is helping a few people who are paralyzed walk again, and a young woman from Utah is among the first to use the new ReWalk Exoskeleton.

Heather Leighton broke her back while cliff diving at Echo Reservoir on August 14, 2011.

“I hit the water expecting it to kind of hurt, I felt like I got the wind knocked out of me,” she said.

Leighton wasn’t able to walk after the accident, until she began using a ReWalk Exoskeleton.

Dr. Jeffrey Rosenbluth is the medical director of the Spinal Cord Injury Acute Rehabilitation program at the University of Utah Health Sciences Center, and he described the device.

“You’re looking at the ReWalk exoskeleton,” he said. “It’s a wearable robotic device that enables folks with spinal cord injuries, and limited or no use of their lower extremities, to actually walk, to get out of their wheelchair and to actually walk.”

Steven Wilson also uses the device, and he said it takes a little getting used to.

“The first day you don’t really do any walking,” he said. “It’s safety training, balance, making sure you can comfortably catch yourself if you fall.”

Wilson broke his back in a rollover car crash nearly six years ago, but he said on a recent vacation to San Francisco he was able to do something extraordinary.

“I walked probably a mile, mile and a half,” he said. 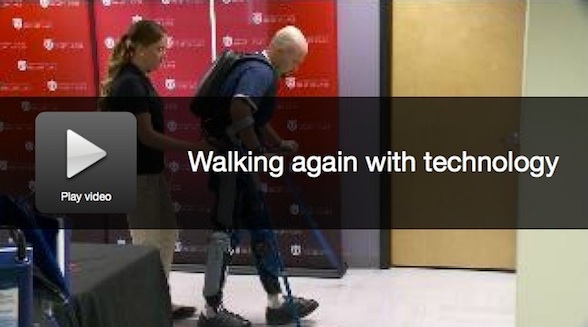 Ronsenbluth said users prompt the motion of the robotic legs by slightly twisting their pelvis, and he said users must be able to move their upper extremities well.

“You have to be able to have good arm, hand and shoulder function,” he said.

The technology was developed in Israel, and it only recently made its way to Salt Lake City through University of Utah Healthcare.

“We have just a handful of folks that are working with it right now,” Rosenbluth said. “We hope to expand that and get as many people who want to try the device to be able to do that.”

Rosenbluth said they are only just beginning to figure out how people will qualify to use the technology available to them. He said he thinks the technology will be expensive at first, but he said the payoff will be worth it.

“We have folks that really can spend a portion of their day out of the wheelchair and doing things from a standing position that they never would have been able to do before,” he said.

by Mark Green and Todd Tanner