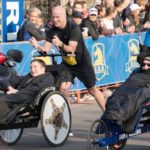 When Don McGrail first met Garrett FitzGerald out of the Secret Service’s Boston office in September 2015, he noticed a focused, driven individual.

And though FitzGerald’s circumstances have dramatically changed since, that hasn’t changed.

An accident that left FitzGerald paralyzed in December 2015 changed him physically, but it hasn’t affected his determination. It’s pushed him through challenging times, through years of rehab at Journey Forward as he continues to try to improve, and it will no doubt carry him this Monday. That’s when he and McGrail will combine to be a dual team — FitzGerald in a wheelchair, and McGrail pushing him — as they run the Boston Marathon, a goal that’s been years in the making.

“This injury has had an impact on him physically, but his mental strength, his focus on achieving goals is still there and definitely stronger,” McGrail said. “He’s been hit with a very unfortunate accident and very serious injury, and yet his attitude is one of determination and focus, and setting goals and achieving goals and setting new goals, and with a real positive attitude.

“He’s not going to let this injury beat him.”

FitzGerald was a first-year Secret Service agent on Dec. 29, 2015, when he was assigned to be on a protection detail for Hillary Clinton’s presidential campaign in Conway, N.H. He was in the back left seat of a car with three other agents when it collided with another car in a head-on collision.

The driver of the other car, who was under the influence of heroin, was killed instantly, and FitzGerald suffered severe spinal cord injuries that left him paralyzed from the chest down.

“It was immediately evident something was drastically wrong,” FitzGerald said.

It took some time for FitzGerald to come to grips with his situation, but he knew the more time and work he put into it, the better the possibilities were. He went from the ICU to a rehab hospital, and by May 2016, he started attending Journey Forward in Canton, an organization dedicated to providing support and bettering the lives of people with spinal cord injuries.

FitzGerald has made progress as he tries to re-teach his body different basic functions and get back to a semblance of normalcy. He said he’s regained some movement in his right arm, and with the assistance of neuromuscular electrical stimulation, known as NMES, he was able to stand up recently.

“It’s been a tremendous help,” FitzGerald said of Journey Forward. “The folks there help people achieve recovery and they give hope.”

That’s why he’s running the Boston Marathon on Journey Forward’s marathon team, an idea that FitzGerald said McGrail brought up back in 2017. Their relationship started when FitzGerald reported to the agency’s Boston office in 2015. FitzGerald worked in a criminal squad, while McGrail was working the protection squad, but the medium-sized office allowed everyone to know each other.

A longtime runner himself, McGrail understands the value of a support team. With FitzGerald’s injury requiring him to spend a significant time with rehab and recovery in addition to supporting and taking care of his family, McGrail recognized that he needed a strong support team. So he came up with the idea of Team Fitz, comprised of colleagues, friends, and others, to help support FitzGerald and his family, but also have some fun.

The group works out together, participates in training runs together, and they have also competed in road races together.

When Team Fitz was created, McGrail said he wanted to come up with an ambitious goal to work for — that’s how the idea of running the Boston Marathon came up.

They reached out to Team Hoyt New England to help them find a suitable running chair, and they’ve been off and running since. The two have run several races together, which has included 5Ks, 10Ks, half marathons and one marathon in Martha’s Vineyard last year. FitzGerald said the hardest part of training for Boston has been the brutal winter weather, and McGrail said it’s been trying to find time in their busy schedules to train. But other members of Team Fitz have been able to train with FitzGerald when he can’t.

They both agreed, though, that being a team has made it easier.

“When Garrett and I are running, it’s a completely different ballgame,” McGrail said. “We’re a team. He’s counting on me and I’m counting on him. We both have different jobs that we’re doing on the course, and it makes it easier.”

That carries to their extended team as well.

“When we finish running on Monday and we can call ourselves Boston Marathon finishers, Team Fitz will still be here and we’ll still be here to support the Fitzgerald family,” McGrail said. “That’s really what this is all about.”

It’s also about supporting Journey Forward, which has helped FitzGerald so much during his ongoing recovery. He’s raised $11,162 for the program as of Thursday afternoon as he continues to try to promote the work — and especially hope — they provide.

With ongoing support from his wife Joan, who FitzGerald said keeps him going, in addition to Team Fitz, FitzGerald has continued to stay motivated and focused despite his circumstances. Completing Boston is yet another significant step in his journey.

“It’s just wonderful,” FitzGerald said. “We set this goal of Boston quite a while, and it took shape over the years. We’re thrilled to be finally accomplishing that.”