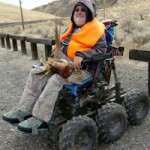 WALLA WALLA, Wash. — Harvesting a pair of pheasants could be considered a success for any hunter.

But for 45-year-old Troy Bird, those two kills represented something much more.

“What he gets out of it is just getting outside,” Bird’s friend and hunting partner Paul Roskelly said. “Also, going and getting his own food. It makes him feel like he’s contributing to taking care of himself.”

Bird, who was injured in a rock climbing accident at age 16, is a quadriplegic.

But with the help of two friends and some intuitive ideas, Bird has been able to hunt everything from elk to pheasants.

Ensunsa, who was a childhood friend of Bird’s, realized his friend had fallen on tough times. As an outlet, Ensunsa suggested hunting.

“Troy was kind of depressed at that time because of his situation,” Roskelly said. “They started talking about hunting, and they asked can we bring Troy to your place?

“Then we started progressing from there,” he added. “Dave and I are pretty much the only ones that take him out.”

With the idea in mind, the trio set out to accomplish the feat. But it wasn’t as easy as wheeling him out to the hunting area.

At first, the group hauled sheets of plywood to place on the ground so they could unload Bird’s chair. From there, they progressed to pulling him on an open trailer behind a utility task vehicle to take him into the wildlife areas.

“He had a smile on his face that went from cheek to cheek,” Roskelly said. “Troy told me that ‘never in a million years did he think that he would be so far back in the mountains hunting for deer’. I was overtaken on how excited he was and still is about getting outdoors and hunting.”

Simply getting Bird into the hunting area was one thing. But for him to line up his shot and make a kill? That would take some ingenuity.

The trio built a device for Bird to shoot with, using his chin to aim, that he would blow air into to fire. Bird then had the idea to build a six-wheeled chair that would allow him more accessibility.

“It changes the accessibility quite a bit,” Roskelly said. “We don’t like to hunt on public roads. We like to get off into the woods.”

With a shooting device and a heavy-duty chair, Bird has had a handful of successful hunts so far this season.

With the help of Ensunsa, Bird harvested a 5×6 bull elk in the Prescott unit using a crossbow.

“A lot of people, they feel like you’re taking advantage (and) you’re shooting the animal for them,” Roskelly said. “In this case, we’re not. The other challenge is we have to make sure we can get his chair into the canyons where the elk are at and where the deer are at.”

Bird’s current chair doesn’t allow him to move, which means Ensunsa and Roskelly must position Bird in a spot the targets will cross.

The pheasant hunt was also fruitful, as Roskelly and Bird enlisted the help of Corrie Hadley of the Washington Department of Fish and Wildlife.

“I didn’t know what we were going to accomplish,” Hadley said. “It was a challenge (to) see what the day would bring us. Getting out there was a feat in itself.”

As Hadley released about 40 birds at the Hollebeke Habitat Management Unit along the Snake River, Bird picked off one bird before nabbing a second later on.

“He can’t load the gun so that’s where his friend Paul comes into play,” Hadley said. “He loads the shotgun for Troy. It’s automatic so it automatically shoots out the shells, but Paul will put it on safety when they’re on the move.”

Hadley said she was in awe watching Bird’s quick trigger.

“He was ecstatic,” Hadley said. “He had the biggest grin imaginable. He and Troy and Paul continually thanked me throughout the morning. It was a great experience.”

With a newfound hobby, Bird, Roskelly and Ensunsa plan on building a new lighter chair that would allow him to get to steeper places.

The group plans on doing one more hunt in December and Bird plans on bagging his first buck next season.