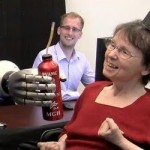 People who have lost their limbs may no longer fear the prospect of paralysis, if researchers manage to perfect a wireless brain implant.

Research by BrainGate, a program that pools research from several universities, is drawing closer to allowing paralyzed patients use of their limbs through the implant.

“The patient thinks ‘up and to the right,’ and we have a controller that actually figures out the correct muscle activations to move in that direction,” Robert Kirsch, a project collaborator, chair of biomedical engineering at Case Western, told the Massachussetts Institute of Technology’s Technology Review.

MIT said the researchers are working on a pioneering surgery that can capture brain signals and filtering these signals to send the correct signals to a prosthetic limb.

Also, MIT quoted Case Western researcherrs as saying the surgery may take place this year or next year.

“This will be the first time someone has hooked up a BCI (brain-computer interface) to an FES (functional electrical stimulation) device,” said Daniel Moran, a neuroscientist at Washington University at St. Louis, though he is not involved in the study.

MIT said the brain implant is a small probe measuring 4 mm on each side with 96 hair-like electrodes that can penetrate 1.5 mm into a part of the motor cortex that controls arm movements.

It added the current version of the model “includes 29 muscles, divided into 138 muscle elements, and 11 joints.”

“On a screen, the patient sees an image of the virtual arm, and works to generate brain commands that ultimately move the virtual arm to touch a red spot, making it turn green,” it added.

A separate report on SingularityHub said the BrainGate researchers first recorded brain signals and convert them into simple commands for a computer cursor.

They then had paralyzed patients control robotic arms with brain signals.

For now, the researchers are working on an algorithm to recognize motion-related signals and translates the information into a command.

Case Western researchers are helping fine-tune the computer algorithm, though their work is so far limited to single-arm movement. — TJD, GMA News