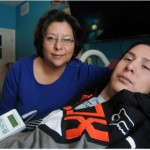 Once used by Christopher Reeve, it was developed in part with funding from the Rick Hansen Institute.

Gabriel Abotossaway doesn’t sound like he can’t breathe on his own.

On the phone from his home in Manitoulin Island, the 22-year-old sounds like most men his age. But Gabriel has required help breathing since a 2011 car accident rendered him a high-level quadriplegic. He’s unable to move his diaphragm and breathe independently.

With news from doctors that he would need a ventilator permanently, his mother, Beverly, searched the Internet and found the NeuRx Diaphragm Pacing System (DPS), a device able to replace respirators, that was conceived by Dr. Raymond Onders, a general surgeon and surgery professor from Case Western Reserve University in Cleveland

It was developed in part with funding from the Rick Hansen Institute, with clinical studies in Cleveland and Vancouver. Superman actor Christopher Reeve was the second person to receive one in 2003.

Beverly convinced Onders to come to the Sudbury Regional Hospital and install the device into Gabriel with the help of local surgeons, enabling him to live at home. The family paid the $31,000 cost, as they couldn’t get government approval.

“This device has changed my life completely,” Gabriel says. “Being in my own bed is a lot better than staying in the hospital. Plus, the food’s better.”

The DPS was approved by Health Canada last month. The procedure of attaching electrodes to the diaphragm with laparoscopic surgery is done easily, and a battery can last up to a week.

Mechanical ventilators are life-saving, but cause frequent respiratory infections. The required tracheostomy takes away a person’s voice, by pumping air below the vocal cords. The cumbersome equipment is loud, impairs mobility, requires constant monitoring, electricity and is extremely costly. These patients are more likely to require hospitalization.

There is also a snowball effect — when these patients are forced to occupy acute-care and intensive care beds, that increases the time needed to admit other patients from emergency.

A 2009 study by the Canadian Agency for Drugs and Technologies in Health estimated savings of nearly $13,000 per month for every patient successfully taken off a respirator.

“Most importantly, quality of life improves,” Onders says. “One of the things Christopher Reeve talked about is that you can’t smell on a respirator. That affects your taste. You want to enjoy life.”

Andrew Cumpson, 22, wants that chance. He broke his neck in Peru in 2011 and requires ventilation around the clock. He can’t afford the care he currently would need to live at home. “(The DPS) would mean a little more freedom for me and not having to have someone by my side all the time, which would be great,” he says.

For now he lives at St. Mary’s on the Lake Hospital in Kingston, taking online courses through the University of Guelph. Now that the device has been approved, his doctor is looking into acquiring it for him, he says.

About 30 newly injured Canadians require ventilators each year, according to Onders. A 2008 survey by Spinal Cord Injury Ontario found that 27 Ontarians live in hospital rather than the community because of ventilation, costing an unnecessary $5 million each year.

Dr. Jeremy Road, a respirologist at Vancouver General Hospital who was a co-investigator on the clinical study with Onders, calls the diaphragmatic pacer “a big advance for people who fit the criteria.” The procedure is now routine early intervention for anyone needing a respirator in B.C.

The groundwork for Health Canada’s acceptance was largely compiled by Keith Hayes, a neuroscientist at Western University and chair of the spinal cord injury committee with the Ontario Neurotrauma Foundation. “(The device) would pay for itself in a couple of weeks, if not months,” he says. “It is an amazing technology.”

Onders just won approval in the U.S. to use the device in people with ALS. “With the exact same device we extend life by 18 months,” he says.

The technology also works well for pediatrics and people with brain stem tumours, he notes. “What we look for is anyone on a ventilator we can help.”