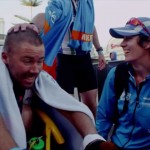 “Impossible is an opinion, to me it means IM-possible … Ironman possible.”

The inspirational words of South African triathlete Pieter du Preez after he became the first quadriplegic athlete to complete an Ironman event back in December at the Busselton event in Western Australia. With a finish time of 13 hours and 20 minutes, du Preez smashed the boundaries for what is possible and continues to lead the way in paratriathlon. Not prepared to bask in his world record breaking achievements, du Preez has big plans in place for 2014, with one word on his mind: Kona.

Whilst a slot is yet to be confirmed, du Preez is likely to compete in Kona given his performance in WA. Again he will be looking to break more records as he becomes the first quadriplegic to complete the marquee event in Hawaii. A huge and somewhat incomprehensible feat given the nature of Du Preez’s disability.

A C6 quadriplegic, du Preez has no hand grip or finger movement and limited arm movement, his strength comes from bicep and shoulder movement. Swimming with no tricep movement, he cannot do the overhead ‘crawl’ and instead does a ‘double-armed backstroke’. Pieter must be supported on the swimmer behind him who taps him to guide du Preez in the right direction.

Following the swim, with no movement from the hips down, he has to rely on sheer ‘biceps and shoulder power’ to propel himself the remaining 222.2 kilometres of the event. Furthermore, the nature of his disability means that Pieter doesn’t sweat; therefore there is also a very real danger that he can over heat and consequently requires regular drenching with a bucket of water to regulate heat.

Clearly, a feat not only of the huge mental and physical proportions but logistically also.

Zone3, the British triathlon brand, will be supporting Pieter throughout the 2014 season. Speaking of Pieter’s achievements CEO James Lock added

“We are so pleased for Pieter, it’s an incredible achievement and one that we are really proud to be involved with. For Pieter it seems the sky’s the limit and we are looking forward to supporting him on his journey in the sport”

“Pieter will be swimming in our award winning Victory wetsuit. The idea behind the ‘Victory’ was to create the best possible long distance wetsuit on the market that allowed athletes to achieve their own personal victory, whatever that may be. It’s safe to say that Pieter has achieved just this and will continue to be victorious in years to come”

For more information about Zone3 and the award winning ‘Victory D’ wetsuit head to www.racezone3.com