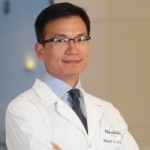 The UCLA research will focus on restoring hand function to patients paralyzed from the neck down. Cervical spinal-cord injuries — those involving the neck — make up more than half of the cases in the U.S.

“Spinal-cord injury typically strikes people in the prime of their lives, with nearly half between ages 16 and 30,” said Lu, an assistant professor of neurosurgery at the David Geffen School of Medicine at UCLA and a clinician at the UCLA Spine Center. “Currently there are no effective treatments for spinal-cord injury, and the resulting paralysis has been viewed as permanent. We are exploring ways to change that.”

In seeking to help people with cervical spinal-cord injuries regain the use of their hands, the UCLA team is looking to build on findings from Edgerton’s earlier work, conducted with Russian scientist Yury Gerasimenko, on lumbar spinal-cord injuries — those to the lower spine.

“Recovering the ability to use one’s hands is a top priority for people with cervical spinal-cord injury,” said Lu, who grew up in Palos Verdes. “We aim to restore patients’ independence by returning their ability to type on a keyboard, open doors and transfer themselves between their bed and wheelchair.”

The most promising therapy uses electrical impulses to stimulate dormant pathways within the spinal cord, allowing the brain’s previously unrecognized signals to reach past the injured area.

The research team screens candidates by placing an electrode on the person’s skin. If the electrical stimulation elicits a positive response, the patient may choose surgical implantation of the electrode under the skin near the spinal injury.

Lu is testing the stimulation at various power levels, rates and locations to fine-tune the most effective dosage and application, which will be customized to each patient and their injury.

A second approach will explore drugs to improve function, particularly the off-label use of serotonergic agonists, medications approved by the Food and Drug Administration that are typically prescribed to treat depression.

Nerve cells communicate in part through the neurotransmitter serotonin. By using drugs that increase serotonin levels within the spinal cord, the researchers hope to open up communication pathways that cells ordinarily wouldn’t recognize and to study how this affects patients’ ability to use and control their hands.

“The spinal cord is smart,” said Edgerton, a distinguished professor of integrative biology and physiology and of neurobiology at UCLA. “The nerve-cell networks in the spinal cord are capable of initiating movement without any input from the brain. This is partly due to muscle sense, or signals sent from the hands and legs directly to the spinal cord.

“In other words, the spinal cord can independently interpret sensory feedback and direct the extremities to balance and move with minimal involvement from the brain.”

The UCLA Department of Neurosurgery is committed to providing the most comprehensive patient care through innovative clinical programs in minimally invasive brain and spinal surgery; neuroendoscopy; neuro-oncology for adult and pediatric brain tumors; cerebrovascular surgery; stereotactic radiosurgery for brain and spinal disorders; surgery for movement disorders such as Parkinson’s disease; and epilepsy surgery. For 22 consecutive years, the department has been ranked among the top neurosurgery programs in the nation by U.S. News & World Report, including No. 1 in Los Angeles and No. 2 on the West Coast.

UCLA is California’s largest university, with an enrollment of more than 40,000 undergraduate and graduate students. The UCLA College of Letters and Science and the university’s 11 professional schools feature renowned faculty and offer 337 degree programs and majors. UCLA is a national and international leader in the breadth and quality of its academic, research, health care, cultural, continuing education and athletic programs. Seven alumni and six faculty have been awarded the Nobel Prize.

Improvement From Complete to Incomplete Injury Observed in One Patient