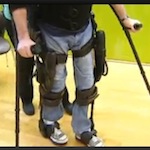 They put their lives on the line for the good of our country every day- American troops aren’t just patriotic heroes, they are survivors.

29 year-old Sgt. Dan Rose from Wisconsin is one of those survivors. He was deployed to southern Afghanistan and returned home with a spinal cord injury that left him unable to use his legs.

“It was April 27th, 2011. Our job was to drive around looking for road side bombs that our insurgents would emplace. My platoon found 100 percent of IED’s up until that day, until the one found us,” Rose told FoxNews.com.

Rose’s truck was hit by about a thousand pounds of explosives.

“All three of us should have been dead– it was a one in a million shot that we made it–but we’re still here and that’s the most important part,” he said.

Paralyzed from the chest down, Rose completed his rehab at the James A. Hailey VA in Tampa, Florida and moved back home to Milwaukee.

Frustrated by the new obstacles in his life, Rose had to make a choice– was he going to let his injury define him?

“I had a ton of nurses and doctors tell me, ‘You know there are all these great things you can do, [like] sports,’ but when you’re sitting in a hospital bed you think, ‘Well that’s easy for you to say— you still have legs,’” Rose said. “But once I got further into the rehab, the recreation therapist got me out there to see all these things and I actually started to realize that they were right — there are all sorts of things you can do.”

Rose kept his word—with the help of adaptive sports equipment he completed his first Marathon, skied the Rockies, mined gold in Alaska and surfed the Atlantic Ocean.

It wasn’t until Ekso Bionics came to Milwaukee that Rose discovered he would get another chance to move the way he did before the accident.

Ekso Bionics, a pioneer in the field of robotic exoskeletons, came to do a demo at the Milwaukee VA Medical Center with their new bionic suit. The Ekso suit is used in rehabilitation clinics to help patients with spinal cord injuries or stroke walk again.

In the suit, walking is achieved when the patient’s weight shifts to activate sensors in the device that initiate the steps. The battery-powered motors act like our leg muscles to pick up the inactive leg and put it down in a normal walking pattern.

Rose was chosen to participate in the demonstration that day and was able to walk in the suit.

“It was amazing, I didn’t want to stop. To be able to stand upright, be eye level with people again and then actually walk across a room- it was something that I’d originally thought was a pipe dream and gave up on a long time ago, but all of a sudden there I am doing it,” Rose said.

Over 40 rehab programs across North America, Europe and Africa have purchased an Ekso suit, but Rose’s hospital wasn’t one of them. As fate would have it, one of the chief doctors discovered a way to give Rose one more opportunity with the suit.

“Dr. Lee gave me a call out of the blue, and was telling me, ‘Hey, there’s this nonprofit organization out there that’s giving away one of those Ekso suits. I want to put you in for it,’ and I was like, ‘Yeah, you know that’d be awesome’- but I kind of thought it was like buying a Powerball ticket,” Rose said.

Soldier Socks selected Rose to be their first recipient of an Ekso suit.

“I was waiting and hoping that the Milwaukee VA center would get one, but I never dreamed of having one on my own,” he said.

Rose uses the suit to exercise and practice standing and stepping.

In any Ekso suit training exercise, the patient is always under the supervision of a trained physical therapist (PT). The PT works with the patient to figure out where their body should be in order to be balanced for each step and enters their assessment into the robot so the patient and robot can move together smoothly.

“There are a lot of different ways we can program the suit to help people that have a variety of neurological injuries or disorders that impair their ability to walk,” Melissa Pullia, a physical therapist and Clinical manager with Ekso Bionics, told FoxNews.com. “We can actually program the device to work specifically on gait training activities that we would do in a physical therapy session. I can change the motor program of the suit to supplement what areas of strength the patient doesn’t have so they are able to work on stepping.”

While all the benefits of using the Ekso suit have yet to be fully researched, there are early reports that patients can benefit from the range of motion and different circulation patterns that help with blood flow.

“Some people have decreased pain when their standing and walking and decreased spasticity. A lot of people also report that there is the benefit, sort of a pyscho-social benefit, of standing upright and being able to look people in the eye,” Pullia said.

Soldier Socks is donating their next Ekso suit to the VA Boston Healthcare System, which serves veterans from Maine to Connecticut and currently has over 500 paralyzed veterans attending their facility.

“It’s just nice to know that the technology is there and I can’t wait to see where the next generations are going to go as the technology advances,” Rose said.

For more information on Soldier Socks and how you can donate, go to www.SoldierSocks.com.