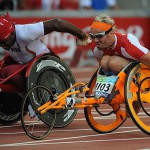 PARIS – Imagine a future with no sporting events for paralysed people. A future in which there is no need, as all the would-be competitors will have been cured.

This scenario, laughable just a few decades ago, is no longer far-fetched, experts say.

Bit by bit, important progress is being made in understanding and tackling aspects of paralysis.

Some believe the time is fast approaching when the major secondary problems from paralysis — bowel, bladder and sexual dysfunction, breathing complications, declining muscle tone and bone density — will be treatable, probably through a combination of drugs, cell replacement, physical training and electronic aids.

And tentative but encouraging signs are emerging in the quest for the ultimate goal: restoring function to paralysed limbs.

“This is an enormously complicated, but we do believe solvable, problem,” said Susan Howley, vice-president of research at the New Jersey-based Christopher and Dana Reeve Foundation for paralysis.

“Some of the best and brightest people at work in the neurosciences are thinking about spinal cord injury repair, and working on it. There is tremendous hope,” she told AFP.

Paralysis, full or partial, happens when a message from the brain gets lost on its way to the muscles, blocked by illness or damage to the spinal highway.

As recently as 20 years ago, researchers focused not on a cure, but simply on making the person comfortable.

“There was a belief that you are born with a certain number of neurons and when they die, they die, the dogma was that you cannot repair” the damage, said Mark Bacon, research director at Spinal Research, a UK charity.

That thinking has been swept away, although the available options remain unchanged: the only licensed treatment is physical rehabilitation, which is useful but limited.

In the lab, though, extraordinary experiments are taking place.

Some are in clinical trials — the long process of vetting a new drug or medical technique for safety and efficacy.

Hopeful of a breakthrough

“We are hopeful of a breakthrough,” said Martin McGlynn, president of Newark-based StemCells Inc, which is implanting stem cells directly into the spines of paralysed trial patients.

Though promising, observers like Howley point out that stem cell research, like most other therapies, is in its infancy.

“We need to better understand which are the best cells to be transplanted and which kind of stem cell should be optimally used; how well do the transplanted cells actually integrate into the central nervous system and become functioning; and how to contend with the scar at the lesion site,” she said.

The work bypasses attempts to link the brain to muscles, instead using electrodes to jolt the relatively autonomous nerve networks of the lower spine directly.

Some experiments have shown paralysed people stand on their own two feet and regain limited movement, though apparently no feeling.

Some individuals regained varying degrees of bladder control and sexual function — “a patient population for whom it was always believed that nothing could be done”, Howley noted.

Among the most thrilling work, though expensive and invasive, is in brain-computer interfaces — using electrodes to read the intent of the brain to make a movement and relaying that message to muscles to enact it.

“The brain-machine interface is a promising field, but we are taking the first, faltering steps,” said Nathanael Jarrasse, a robot specialist at the French National Centre for Scientific Research (CNRS).

A common and tragic problem

As many as 500,000 people per year suffer spinal cord injuries — one of the main causes of paralysis, according to the World Health Organisation (WHO).

What are the chances of a cure?

“It’s obvious there isn’t going to be a single magic bullet,” said Howley.

“The way we have to think about fixing spinal cord injury is picking the low-hanging fruit first, as we continue to work towards fixing the more difficult, long-term problems.”

Experts believe the answer will be a combination of treatments.

Doctors would likely administer a “neuroprotectant” drug as soon as possible after injury to reduce the death of precious nerve cells, said Bacon.

This could be followed by a drug to encourage the rerouting of broken nerve connections. Next could be cell replacement therapy to reverse whatever damage could not be stopped.

Finally, the patient may be helped with electrical stimulation to restore some automatic functions and computer-brain interfaces to wield a still useless limb.

“We are at the beginning of the journey in the same way cancer was 20 or 30 years ago, where we have the prospects of treatments that will improve the outcome, and with time we will refine those,” said Bacon.

Sharpening for a cause