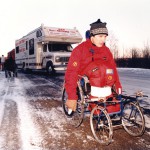 EDMONTON – Rick Hansen’s gruelling worldwide odyssey for spinal-cord research rolled into Edmonton to the cheers of hundreds of flag-waving children and adults.

He rolled his wheelchair past more than 500 people who gathered to greet him at Gateway Park near the southern city limits.

“I want to make it very clear that the reason I am wheeling around the world is to try to create a much better understanding of disabled persons and their potential,” the 29-year-old said amid shouts and applause.

“We hope you believe that just because you have a disability, it doesn’t mean you can’t go on to reach your goals and your hopes and dreams in life … to be the very best you can be with what you have.”

Hansen accepted the keys to the city from mayor Laurence Decore and a red nose from tiny Jennifer Noskiye, who has cerebral palsy, and had patiently waited several hours in -6 C temperatures to greet the Man in Motion.

Hansen, who was left partially paralyzed by a 1974 car accident, had travelled 37,000 kilometres and visited 33 countries before reaching Edmonton and had 3,000 km more to go to reach the end of his journey in Vancouver. He had raised $6.8 million of the $10 million he hoped to collect when he set out from Vancouver two years earlier. He had raised an estimated $825,000 since arriving in Alberta.

Later in the day, Hansen was greeted by a thunderous five-minute standing ovation from more than 4,500 people as he entered Northlands Coliseum accompanied by 12 wheelchair athletes and the familiar sound of John Parr’s Man in Motion, the theme song from the movie St. Elmo’s Fire.

About 150 people in wheelchairs surrounding the stage applauded and choked back tears as Hansen wheeled around the Coliseum.

The next day, he was cheered by 7,000 fans at the University of Alberta Butterdome. The U of A named its Training Centre for the Physically Disabled and indoor track after him.

When Hansen’s tour ended at BC Place Stadium on May 22, he had raised $26 million, more than double his initial goal.

Now 56, Hansen is currently the president and CEO of the Rick Hansen Foundation, which has generated more than $200 million for spinal cord injury-related programs. He lives with his wife (his former physiotherapist) and three daughters in Richmond, B.C.