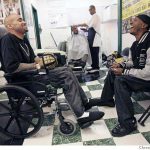 With the wounded toll topping homicides, some survivors are gaining insight that makes them whole in a new way

That’s what happened to Ronnie “Henneessy” Jackson. In 2003, gunmen using AK-47 and Mac-90 automatic rifles fired 50 rounds into his parked van in East Oakland. He was struck 11 times, briefly flatlined in surgery, then endured 10 operations and spent nearly three years paralyzed from the neck down.

“I know death up close. I got gunshot wounds from my neck to my knees,” said Jackson, 33, a streetwise Oakland native with a minor criminal background who is better known by his nickname and rap moniker. “I still got an AK bullet in my back and Mac-90 bullet in my leg.”

So in June, when his buddy Akil “Slim” Anderson was shot by a robber and left paralyzed, Jackson knew what he had to do.

“I just took it upon myself to just show him that what he would expect from losing his ability to walk,” he said. “I just wanted him to keep his head up, and keep his game up.”

Anderson is among hundreds of people wounded, but not killed, by gunfire in Oakland this year. Police say the number of nonfatal shootings has increased by nearly 50 percent from last year – to 674 as of Dec. 17, compared with 459 in all of 2005.

While 148 of this year’s shooting victims have died in homicides, the highest toll in more than a decade, many of the others are alive as a result of luck and modern medical care.

“The difference between a homicide and a (nonfatal) shooting is often a fraction of an inch,” said Oakland police homicide Sgt. Tony Jones. “The person pulling the trigger is trying to commit murder. The only reason you live is because the shooter barely missed a major artery or because they got you to Highland (Hospital) quick enough to save you.”

Many of the shooting victims, including Jackson and Anderson, do not have health insurance and are unable to pay medical bills that can reach hundreds of thousands of dollars per patient – which burdens the county’s public health system with millions of dollars a year in unreimbursed expenses, officials say. The trauma also puts an emotional strain on victims, who can spend years struggling to recuperate.

A couple of days after Anderson, 29, was shot, Jackson showed up at the hospital and began spending hours at his bedside. And for six months, Jackson has been encouraging Anderson not to give up hope and to keep trying to use his legs again. Six month later, they still commiserate each day about their brushes with death and their struggles with life.

“If it wasn’t for Henneessy, I don’t know if Akil would have made it,” said Anderson’s sister, Shani Anderson. “My brother might have given up. But Henneessy knows exactly what he is going through, and he’s been there for him.”

Jackson survived, but not for the shooters’ lack of trying. Two gunmen using automatic weapons fired more than 50 rounds into his van on April 3, 2003, while he was sitting in the driver’s seat. He says he’s still not sure of the motive. The case remains unsolved.

It was the second time he had been shot. He was wounded with two gunshots in 2001 in the same neighborhood, near 76th Avenue and MacArthur Boulevard in one of the most violent areas of the city.

But those injuries were minor compared to the 2003 shooting. In the emergency room, Jackson said that all activity in his brain and his heart stopped until doctors resuscitated him.

“I spent eight months in a gurney, and when they let me sit up, I got dizzy and disoriented,” he said. “I thought I was going to be there forever.”

At first, Jackson said he became depressed and didn’t want his four kids or any “lady friends” to see him stuck in a bed, unable to use the bathroom without help.

“I was kind of hard to deal with,” he said. “I was in so much pain and trauma, it was hard to be nice. Just the tiniest thing like the clothes touching my skin would hurt or just bumping into the bed would hurt. Sometimes people just talking too much would give me a headache.”

But the turning point came about six months later – “that first day I flinched my big toe just a teeny bit, I knew then I was going to walk someday,” Jackson said.

Jackson would crawl around his home, dragging himself along the floor and then bracing himself on furniture or walls. After a year and a half, he was able to stand up, and on the third anniversary of the shooting, he took his first steps without assistance.

Now, he frequently takes walks near the block where he was shot. He has an unusual gait, as if his legs want to go forward a little faster than his upper body.

“I feel like I’m on stilts,” he said laughing. “I can’t really feel my legs below the knees. I tell them to walk and they move, so that’s all that counts.”

Anderson had not been wounded when he first met Jackson last year. Both men were recording self-produced hip-hop CDs at a private studio in San Leandro.

“When I heard his story, I was really stunned by it,” said Anderson, who grew up in Chico and lived in Santa Rosa until moving to Oakland in 2005. “It sounded unreal to me. I never thought something like this would happen to me – that I would get shot and paralyzed.”

On June 6, Anderson was walking into a hair salon at 45th and Market streets when a gunman surprised him from behind and demanded his gold chain necklace.

“When I turned, he shot me once in the chest,” Anderson said. “He stood over me and tried to shoot me again, but the gun jammed. He grabbed my necklace and ran away.”

Anderson couldn’t move his legs or stand. But he didn’t wait for an ambulance – a friend drove him to Highland Hospital in Oakland. The bullet cut an artery and damaged nerves along his spine, he said.

“I flatlined – I was dead for five minutes, but the doctors brought me back,” Anderson said. “The bullet went through my stomach, tore up my liver, went through the main artery that pumps blood to my heart, and then it got my spine. I was unconscious for eight days.”

When he finally woke up, he became enraged.

“They had to restrain me when they told me I couldn’t walk,” said Anderson, who has since moved out of the Bay Area, in part to avoid his attacker, who remains at large and has not been identified by police.

Neither Anderson’s girlfriend, Davina Calavano, nor his sister knew Jackson before he showed up at the hospital shortly after the shooting.

“Henneessy just lifted his spirit, completely changed Akil’s attitude and his emotions,” said Calavano. “Henneessy helped Akil believe in himself in a way that no doctor, no social worker, no family member could do.”

When asked why he spent so much time with Anderson, Jackson shrugged, grinned and replied: “He’s my dog, man. I just look out for him.”

“No one did that for me,” Jackson added. “I got a second chance at life, and I wanted to do something better. I realized I was the only one who could do this for him. Besides, we never did make a CD together.”

Anderson said he spent more than a month at Highland, and during that time he saw people even more seriously injured than he had been.

“There are people there I thought had no chance,” Anderson said. “I had some bad luck to get shot in Oakland. But it was good luck I went to Highland.”

Hospital officials, citing patient confidentiality law, declined to comment. The emergency room there is widely considered one of the best in the nation in part because the medical staff has so much experience with shooting victims.

Jones, who investigated nonfatal shootings before joining the homicide team, said Oakland police are often in awe of how the staff at Highland Hospital saves lives.

“They perform miracles at Highland,” Jones said. ”There was a case where a guy was shot right in the middle of his forehead – I looked at him and thought, ‘He’s dead, that’s homicide,’ but they brought him back. I’ve interviewed the victim several times. He still suffers from his injury – how can you not? – but he walks and talks like nothing happened.”

While Anderson and Jackson praised Highland’s emergency room, their overall experience with the health-care system since leaving the hospital has not been as good. Both men said they were denied state benefits for crime victims because of their prior criminal convictions for drug possession.

Anderson has more than $600,000 in unpaid medical bills, and the only Physical Therapy he receives is paid for by his girlfriend and her family.

“He needs a spinal cord specialist, but we can’t afford that,” Calavano said.

To Anderson, it’s all a matter of perspective. He may be broke and partially paralyzed, but he is alive, loved and each day makes a tiny bit of progress.

“I’m still alive this Christmas – that’s really all you need for a present,” Anderson said. “Everybody should cherish the things that they have and stop bitching and complaining because something like this can happen and then you really have reason to complain.”
About the series

With homicides in Oakland at the highest count in more than a decade, The Chronicle is expanding its coverage with a multimedia project that shows the human impact of violence in the city.

The project is the result of more than four months of work, and dozens of people agreed to share their stories. They include Ronnie “Henneessy” Jackson and Akil “Slim” Anderson, the subjects of today’s story, who became good friends after surviving life-threatening gunshot wounds.

photo galleries with dozens of images at sfgate.com/oaklandhomicides/ :

— Remembering the dead: A list of this year’s homicide victims, with profiles, photos, links to articles and audio clips from family members and friends.

— Mapping the homicides: Interactive graphics show where each of more than 550 homicides in the past five years has occurred, plus the locations of the city’s 365 liquor stores, which residents and police have targeted as magnets for crime.

— Living amid the killing: Residents tell how the violence has affected them, in audio and video reports.

— Voices of concern: A variety of thoughts about the problem, plus possible solutions.

— How to give help or get help: A list of resources.

‘You can still live life’