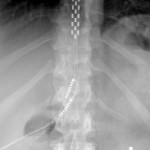 Success rates for spinal cord stimulators are much higher in patients who wait less than two years for an implant after the onset of chronic pain, according to a new study presented at the 30th Annual Meeting of the American Academy of Pain Medicine.

Spinal cord stimulators (SCS) surgically implanted in the spine give relief to pain patients by sending electrical pulses to a specific nerve, turning pain signals to the brain into a tingling sensation.

The stimulators are often considered the treatment of last resort after narcotic painkillers, physical therapy, steroid shots and other types of treatment fail. Because of that, many patients wait years before agreeing to have the implants.

Researchers say less than half of patients report long-term success with SCS in the treatment of chronic pain. But success rates significantly improve when there is less wait time, according to lead author Krishna Kumar, MD, of Regina General Hospital in Regina, Saskatchewan, Canada.

“The success of SCS is time sensitive, in that as wait times decline, long-term outcomes with SCS are enhanced,” said Kumar.

Kumar cited barriers to referral that include lack of awareness about SCS among healthcare providers, patients and payers; as well as ongoing issues over insurance reimbursement and the fragmentation of pain management into different specialties.

Patients first saw a physician an average of 3.4 months after developing chronic pain. Family physicians managed pain patients for a little less than a year. Specialists then took over management for another 39.8 months on average.

The average wait time for SCS implantation after the onset of symptoms was a little over 5 years. Neurosurgeons were the quickest to make a referral, while anesthetists were most likely to delay implantation. A referral for SCS treatment took over 2 years longer on average for non-implanting anesthetists when compared to neurosurgeons.

Kumar said successful SCS outcomes often depend on candidate selection and the underlying pain pathology to determine who might benefit from an implant.

Patients who are not good candidates for SCS have persistent uncontrolled or undiagnosed psychiatric disorder, an unwillingness to curb inappropriate drug use, and cognitive issues that could interfere with the operation of SCS equipment.

“Chronic pain is a disease unto itself, which is responsible for physical and psychosocial suffering. The importance of timely treatment must, therefore, be recognized by all physicians,” said Kumar.

MarketsandMarkets, a market research company in Dallas, reports that the global market for spinal cord stimulators and other neuromodulation devices is poised to expand to $6.8 billion by 2017.