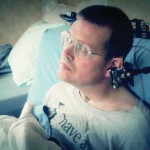 A University of Kansas mechanical engineering student has developed a ground-breaking device that will help his uncle, who suffered a brain stem stroke in 2002 that left him a quadriplegic and unable to speak, communicate and live more independently.

The device — called Ultramouse — was designed by 22-year-old Henry Clever, a St. Louis senior who will graduate in May. The concept originated with his uncle, Henry Evans, of Palo Alto, Calif., whose mind wasn’t affected by the stroke that struck him at age 40.

“My uncle came up with the idea, and I took it from there,” Clever said.

Evans, who earned a master’s degree in business administration from Stanford University in the 1990s and worked as a chief financial officer for a start-up company in Silicon Valley before the stroke, had been using an eye-tracking device that attached to his glasses and transmitted a signal to a computer to compose written correspondence and navigate the Internet.

The problem was the computer had to be two feet from Evans’ face and required frequent repositioning by a caregiver.

After talking with others in the robotics field, Evans came up with the concept for Ultramouse, a new system of sensors that would allow more freedom of movement and reduce his reliance on others.

Evans shared the idea with his nephew in 2012, when Clever traveled to California to participate in an internship program at Robots for Humanity, a collaboration of Willow Garage Inc., a private company associated with Georgia Tech, to adapt a robot to help those with disabilities.

Later that summer, Clever was taking part in another internship in St. Louis and working in his spare time on the design for Ultramouse.

“I was working eight hours a day and then writing computer code and soldering four or five hours at night for about 11/2 months,” he said.

Ultramouse relies on sensors, measuring about 2 inches by 1 inch each, that are positioned behind and beside the head. It features a single-throw push button switch that can be operated by thumb to engage the mouse click. If a person can’t manipulate a clicker with a thumb, other options, such as a foot pedal, tongue clicker or head position switch, are available.

Clever said he and his friends tested the device before shipping it to his uncle for a tryout.

“It worked well,” he said. “He was able to communicate with it and watch YouTube videos on a large TV screen.”

Clever said his uncle continues to use the eye-tracking device for emailing and other tasks, while Ultramouse is preferred for TV screens and computers with large monitors.

With guidance from Sarah Kieweg, his academic adviser and KU assistant professor of mechanical engineering, Clever entered Ultramouse in the 2013 American Society of Mechanical Engineers International Undergraduate Research and Design Expo in November at San Diego. He won second place.

Kieweg said Clever showed the “motivation and independent initiative to use engineering to improve human health, and the successful completion of a very creative device.”

Clever, who has no plans to patent Ultramouse, currently is working on a bioengineering research project involving fluid mechanics with applications that could help prevent HIV/AIDS. He plans to attend graduate school in the fall.

As an engineer, Clever said his goal is to help others facing health challenges or injuries that impede their lives.

“I just want to use the talents I’ve been given to help them,” he said.