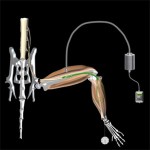 LONDON, April 10, 2014 — Paralysis caused by a motor neuron disease or spinal cord injury understandably causes feelings of hopelessness, helplessness and despair. But there is optimism in a new technique that can artificially control paralyzed muscles using light.

“This strategy has significant advantages over existing techniques that use electricity to stimulate nerves, which can be painful and often results in rapid muscle fatigue,” said Dr. Linda Greensmith of the Medical Research Council Centre for Neuromuscular Diseases at UCL’s Institute of Neurology. “If the existing motor neurons are lost due to injury or disease, electrical stimulation of nerves is rendered useless as these, too, are lost.”

“We custom-tailored embryonic stem cells so that motor neurons derived from them can function as part of the muscle pacemaker device,” said Dr. Ivo Lieberam of the Medical Research Council Centre for Developmental Neurobiology at King’s College.

These cells were equipped with a molecular light sensor, allowing the researchers to control the motor neurons with flashes of blue light. They were able to adjust muscle control by modifying the intensity, duration and frequency of the light pulses.

A survival gene was then built in; the researchers said this helped the stem cell motor neurons stay alive when transplanted into the injured nerves.

Conducting the experiments on mice, the team demonstrated that the transplanted motor neurons grew along the injured nerves to connect successfully with the paralyzed muscles, which could then be controlled by pulses of blue light.

The researchers expect to be able to conduct human trials within the next five years. The work was published in Science. (doi: 10.1126/science.1248523)

Cheerleading Is Leading Cause Of Catastrophic Injury In Young Women