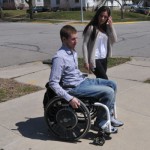 CEDAR FALLS | He made the tackle on a kickoff in October 2010 but was down on the turf at Luther College. When they called for a helicopter, Chris Norton suspected he was in serious trouble.

“I was a lifeguard, so I know with any kind of a head or neck injury, you take precautions,” he says.

“I knew it was a lot bigger deal than a neck sprain.”

Norton, 18 at the time, had broken two vertebrae and was paralyzed from the neck down. Doctors offered only a 3 percent chance he would move again. He spent seven months at Mayo Clinic facilities in Rochester, Minn., then transferred to a rehabilitation center in Iowa.

As he built his own strength, faced his own challenges, Norton noticed others with similar spinal cord injuries struggling too. They, however, did not have the insurance benefits provided by his parents and by the NCAA.

“I just saw a lot of people fall through the cracks. Everybody else was plateauing, but I was still improving,” he says. “It made me feel fortunate for what I have.”

Outside the Mayo Clinic, widely regarded as one of the best hospitals in the world, Norton also discovered not every facility is created equal.

“Going from Rochester to Des Moines, I was shocked by the lack of technology and equipment they had, even in Iowa’s largest city,” he says. “Frankly, it scared me. What if I had been taken to Des Moines rather than Rochester?”

Norton responded by setting up the SCI CAN Foundation, and each part of its name carries significance. The first set of letters stand for spinal cord injury. The second represent his initials, Chris Andrew Norton, and his never-surrender philosophy. The foundation is the financial vehicle to address equipment and other needs at hospitals and rehabilitation centers.

In three years, Norton, his family and friends have raised $230,000. To date, his SCI CAN Foundation has distributed $168,000 to entities like On With Life in Ankeny, Euroteam in Decorah and the Mercy Foundation in Des Moines.

“It just took off. Everybody’s been getting behind it,” Norton says.

He pulled it off while continuing his own rehabilitation, continuing as a full-time business management student at Luther and keeping up a heavy schedule of speaking engagements. Norton also stages annual fundraising events in Des Moines and Decorah. He will add a third this year in Rochester.

“After I got hurt I was really blown away by all the support I received, even from complete strangers,” he says.

“This is my way of giving back.”

Norton’s girlfriend, Emily Summers, a student at the University of Northern Iowa, knows he would like to do more. On Tuesday, Norton took an evaluation to see what kind of equipment would be necessary for him to pilot a vehicle. On Wednesday, Summers entered him in an online contest sponsored by the National Mobility Equipment Dealers Association and Mobility Ventures.

According to the nonprofit organization’s website, at least four “local heroes” will receive a wheelchair-accessible vehicle tailored to their needs.

“He never talks about things that bother him. But I could tell it bugs him that he can’t drive himself,” Summer says.

She believes her boyfriend meets the contest’s guidelines as someone who encourages others with disabilities and who embodies the spirit of life moving forward.

“He is definitely a caring guy and making a difference in other people’s lives,” Summers says. “He’s absolutely shown me that anything is possible, and I now strive to be more in my life.”

Norton concedes being dependent for rides to therapy sessions, speaking appointments and school does get old.

“I can’t just go home. I have to coordinate drivers,” he adds. “It’s kind of a tedious, troublesome process.”

Summers sees the vehicle as a way for Norton to expand his reach.

“It would really help him make a bigger difference, to get his story out there,” she says.

Norton is also pursuing a couple of other goals. One is to walk across the stage next year at his graduation from Luther.

He is making headway. Norton can stand for extended periods now and this week used crutches for the first time, though a therapist stayed close by.

“We’re definitely going to need some partners with it. But we need to get it done.”