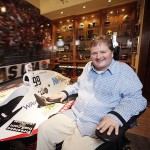 HENDERSON, Nev. – A 1999 IndyCar sits inside Sam Schmidt’s Las Vegas-area home. One day, Schmidt, who is a quadriplegic, hopes to drive it again. The notion is not as far-fetched as it might seem.

Schmidt already has started driving a passenger car again. He will get to publicly display his prowess later this month at Indianapolis Motor Speedway when he helps unveil an innovative technological achievement.

A black 2014 Corvette C7 Stingray has been fitted with advanced electronics and a human-to-machine interface to allow people with disabilities similar to Schmidt’s to drive solo.

No hands or feet are required to drive it.

“Just use my head,” said Schmidt, a former Verizon IndyCar Series race winner. “Some would say it’s the first time I’ve done that.”

In January 2000, Schmidt crashed during an IndyCar test session at Walt Disney World Speedway in Orlando, Fla. He spent six months in a St. Louis rehabilitation center. To this day, pursuit of life skills remains a daily challenge, the result of the severe spinal cord injury he suffered.

A nurse comes each morning to help him with showering, shaving and therapy. Schmidt rides an electronic bike every other day. He uses a walking chair. He pushes himself.

Years ago, Schmidt learned to use a self-guided wheelchair. He’s so proficient at it now that he can verbally text and drive. When recently approached about piloting a car for the first time since the accident, he figured that was the next logical step.

Now comes the hard part: Performing in front of an audience.

“If you look closely at the walls around this house you’ll see the marks (of the wheelchair),” he said, laughing. “You wouldn’t want me driving.”

But this Corvette is remarkably sophisticated. Through a collaboration among Arrow Electronics, Ball Aerospace and Technologies Corp., Falci Adaptive Motorsports and Schmidt’s IndyCar team, Schmidt Peterson Motorsports, it’s a sight to behold.

Four sensors on the headwear transmit information to infrared cameras on the dashboard. Head tilting dictates steering and acceleration in 10 mph increments.

A bite sensor slows the car. GPS technology prevents movement within 1.5 meters from virtual curbing and within a 10-meter steering width.

If all that fails, engineers can take over the car.

“I had two requirements, and the first was to stay safe,” said Schmidt, who has twice tested the car at IMS. “The second was that I had to be the one driving the car.”

Schmidt added a third stipulation if he was going to be driving at IMS, where he raced in three Indianapolis 500s and led four laps of the 1999 race before crashing in Turn 1.

Appropriately, Schmidt is scheduled to be on the clock at IMS on Sunday, May 18, which will be pole day.

Maybe Schmidt, now 49, was destined to help develop the technology that one day may allow other quadriplegics to drive cars.

In 1974, his father, Marvin, was injured in an off-road racing accident in Mexico. Marvin became his son’s lifelong inspiration.

“I watched him go to outpatient therapy every day for two years,” Schmidt said. “It was two hours a day to the point of tears to get back the use of his right leg. He never complained.”

Marvin now walks, and he worked until he was 60. He and his wife, Judy, will be in Dayton, Ohio, on Monday for the formal unveiling of the SAM Project.

When Schmidt’s IndyCar accident occurred in Orlando, life didn’t stop, and his wife, Sheila,reminded him of that. After the rehabilitation period in St. Louis, she insisted he find something to do.

“Because I was driving her crazy,” he said.

Schmidt’s first idea was to start a race team, which he did a year after the crash. He now acknowledges that wasn’t the smartest move because he wasn’t ready to personally invest, and it showed on the track that season.

But the team’s ascent can be measured in the time Schmidt has devoted to it. He’s on the phone with team officials several times a day, travels 125 days a year, and in 2011 engineered a partnership with Bryan Herta Autosport that led to Dan Wheldon winning the Indianapolis 500 in a Schmidt-owned car.

In Indy Lights, Schmidt is the record-setting car owner for both race wins (65) and season championships (seven, including the past four). His IndyCar driver, Simon Pagenaud, finished third in the 2013 points race behind only a Ganassi and a Penske driver.

Pagenaud will be one of the favorites to win Saturday’s inaugural Grand Prix of Indianapolis, a road race. Schmidt Peterson Motorsports has entered three cars in the 500, which opens for official practice next Sunday. One of those drivers is 1995 500 winner Jacques Villeneuve.

Davey Hamilton, who was Schmidt’s first IndyCar driver and now is a partner in the Pagenaud car, calls Schmidt’s determination “amazing.” Hamilton should know. He suffered major foot and ankle injuries in an IndyCar crash at Texas Motor Speedway in ’01.

“I came through a lot, and it’s not even a scratch compared to what he’s gone through,” Hamilton said. “I can’t even bring (my woes) up to him.

“No way could I accomplish what he’s accomplished. Very few people could.”

Schmidt is working his cell phone by 8 a.m. and is usually at his desk an hour or so later.

He has three primary endeavors: the Indianapolis-based race team; the Sam Schmidt Paralysis Foundation, which will host its 15th annual fundraiser, the Racing to Recovery Gala, May 24 at the Lucas Oil Estate in Carmel; and leadership of Braun Corporation.

Schmidt was a close friend of Ralph Braun, who founded Save-A-Step Manufacturing in Winamac, Ind., in 1963. Braun was diagnosed with Muscular Dystrophy at age 6 and lost the use of his legs as a teenager.

Today, Braun Corp., is a company of about 900 employees specializing in wheelchair lifts, and Schmidt, with his background in sales and marketing, became a partner two years ago on Carb Day at IMS.

The company uses the 500 as a promotional platform, bringing hundreds of people to see the cars carrying BraunAbility decals. Braun died last year; Schmidt now helps to lead the company as a member of the board of directors.

“Ralph wanted somebody in a chair to be the (face) of the company when he was gone,” he said. “I spent every day honoring him.”

Schmidt’s daughter, Savannah, was nearly 3 and his son, Spencer, was 6 months old at the time of the Orlando accident.

But they see the benefits of Schmidt’s hard work and the support Sheila provides. Their Tuscan-inspired home sits on sparkling Lake Las Vegas. Singer Celine Dion is a neighbor.

“The antithesis of Las Vegas,” Schmidt said. “It’s quiet, no (bright) lights and stocked with fish.”

Schmidt’s father owned a salvage yard and auto parts company in Los Angeles before turning it over to Schmidt, who earned his master’s degree in international finance from Pepperdine University. Schmidt had learned business in a variety of ways, promoting concerts and exporting cars while in college.

Schmidt also has had incredible business luck. An investment in Greg Arnette’s new sunglasses company in 1992 led to a sale to Bausch & Lomb four years later for nearly $100 million. Schmidt rolled his share of the windfall into real estate in the exploding Las Vegas market.

“I would classify myself as a risk-taker,” he said. “I’m not afraid to go broke.”

Schmidt also is something of a control freak, something those who have worked with him can attest. Before the accident, his neat-freak approach led to everything having its place: Shoes, clothes, his investments.

“Very tidy,” he said. “Not your typical race car driver at all.”

The one thing Schmidt never had the urge to control post-accident was a car. While he missed it occasionally, there was frustration over the limited number of handicapped-accessible vehicles. But it wasn’t what drove him.

That’s the irony of the SAM Project.

How the car works