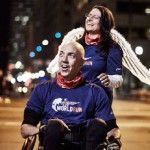 As a professional triathlete and former swimmer at the University of Georgia, Haley Chura always has raced to a finish line. There’s always been a beginning, middle and defined end to every race she has ever entered — until just recently.

At 6 a.m. ET on May 4 in Florida, Chura was one of nearly 36,000 runners worldwide who took part in the Wings For Life World Run to raise money for spinal-cord research. Held simultaneously on 34 courses in six continents and 13 time zones, the event featured an unusual format: All entrants began at the same time and ran until they were passed by a “Catcher Car” that started 30 minutes later.

Going into the race, Chura, of Atlanta, figured she’d be able to run about 13 miles. Instead, she ran 28.34 miles to finish No. 1 among all American women and No. 6 in the world. After passing the half-marathon distance (13.2 miles), she realized she had no idea where her finish line would be.

Because her race began so early, and anticipating the race in Sunrise wouldn’t be that long, Chura hadn’t done her usual marathon-distance prep. She hadn’t slathered on sunscreen, put on a hat, worn her best socks or tucked away food for a mid-race pick-me-up.

“In a normal race, I tell myself the faster you run, the sooner you’re finished,” she said. “And in this race I couldn’t do that.

“I was like, ‘Wait a second. The faster you run, the farther you have to go,’ ” she added, laughing.

Eventually, the Catcher Car passed her, just as it had with most of the 883 runners at Sunrise, and her race was over — but not before she set a personal marathon best of 3 hours, 3 minutes. Chura, 28, admits she probably could have tried to outkick the car and get a little more distance, but she laughed off that idea.

“At that point, I was ready to be done,” she says. Now Chura — who finished first out of the water and 24th overall at the Ironman World Championship last year in Kona, Hawaii — is already planning to do the next Wings For Life World Run, set for May 3. She says it’s a nice change-of-pace event, competitive but with a festival atmosphere and for a good cause.

With many high-profile, professional athletes involved as ambassador participants at race venues, too, she even found herself passing Olympian Lolo Jones early in the race, then got to spend time with her afterward.

“It was really fun,” she said of the event. “So different.”

The inaugural Wings for Life World Run raised $4.1 million, with organizers saying 100 percent of those funds will go toward research to help people who suffer from spinal-cord injuries. Among the 34 global race venues — including locations in Europe, Africa, Asia, North and South America and Oceania — were three in the United States: in Sunrise; Denver; and Santa Clarita, Calif., just north of Los Angeles.

Because the races were held simultaneously, those in Denver (4 a.m.) and Santa Clarita (3 a.m.) required middle-of-the-night wake-up calls. Lemawork Ketema of Ethiopia, running in Austria, covered 46.4 miles to take the men’s title, with Elise Selvikvag Molvik, running in Norway, the women’s winner at 34.04 miles.

Chura was the top American female, with Michael Wardian — also running at Sunrise — the top U.S. male (34.1 miles). Calum Neff of Canada, running 34.56 miles at Santa Clarita, had the top distance for a male at U.S. venues.

Tatyana McFadden, who won the women’s wheelchair division at the Boston Marathon, took the same Wings for Life title at 11.3 miles.

Overall, the event drew 35,397 runners (age 18 to 92) from 164 countries. The average distance covered was 9.3 miles. Many ran because it seemed like a fun event, and others had personal ties with friends or family who had suffered spinal-cord injuries.

Zoltan Polgar, the race director in Sunrise, said setting up his event was like nothing he had ever done. When runners showed up that morning, a standard question was: “How far is the run?”

He couldn’t give them an answer.

“It’s unlike planning any other type of running event,” he said, noting that the course needed to be set for at least 60 miles, but that the ultimate finish line for the winner could be just about anywhere.

“Not knowing where the finish line was. Not knowing if you were going to get to 100 or more kilometers … Logistically, there were challenges.”

The Catcher Car gave runners a half-hour head start, but runners weren’t certain how long it would take for the mobile finish line to pass them. It started at 9.3 mph, then increased its speed every hour to 9.94, 10.56, 12.43 and finally 21.75 until it passed every runner. Polgar said the relentless pursuit of the Catcher Car gave the race a special element.

Race organizers tried to give participants a sense of the global nature of the event with giant-screen broadcasts of the races from around the world at the starting areas and updates of the top performers. By the time Chura was back in the starting area, she knew she was No. 1 among U.S. women and in the top 10 overall.

Chura says returning to the starting line for the post-race festivities was another aspect of the Wings For Life World Run that put a different spin on any running or triathlon event she’s ever been a part of.

“It was really wild,” she said. “Normally the winners finish first. And we get all the food first and everything like that.

“In this case, the back-of-the-packers, they finished first, they’re eating all the Whole Foods and the food trucks and celebrating and by the time I got there, all the trash cans are full. It’s kind of a fun dynamic that way, too.”

By Doug Williams | Special to ESPN.com

Sam Schmidt’s paralysis gives him ability to inspire others