The program was home to someone who went from full traumatic spinal injury, to being able to walk again

LOUISVILLE, Ky. — It’s one small step for man, but one giant step for paralysis treatment.

The University of Louisville’s Kentucky Spinal Cord Injury Research Center has put itself on the map over the years with groundbreaking success for people with spinal cord injuries.

As the program continues to grow one man, with the highest level of injury in the study, is making huge strides in just the first few months.

Matt Wetherbee is a 31-year-old quadriplegic who is showing the community the hard work being done at the University of Louisville isn’t going to waste.

“Once I was two years post injury I was accepted into the research study here. I was ecstatic about it and ready to try something new,” said Wetherbee.

It was the start of a new journey after a basketball accident left most of his body paralyzed.

“I was actually planning on proposing a week after I got hurt which kind of threw a wrench in things,” Wetherbee said.

But instead of giving up, he and his now fiance, packed their bags from Boston and landed in Louisville, to become a part of the groundbreaking spinal cord study.

“I think it’s important for the community to understand the value of the research that’s being done,” said Claudia Angeli, who is a Senior Researcher at Frasier Institute, with The Kentucky Spinal Cord Research Center and an assistant professor at the University.

Over the last ten years, they have reached the unmarked territory.

“The research, in general, has been very promising for everybody before me and even ya know early in the process right now in the study I’m seeing changes in my own body using the stimulator,” Matt said. 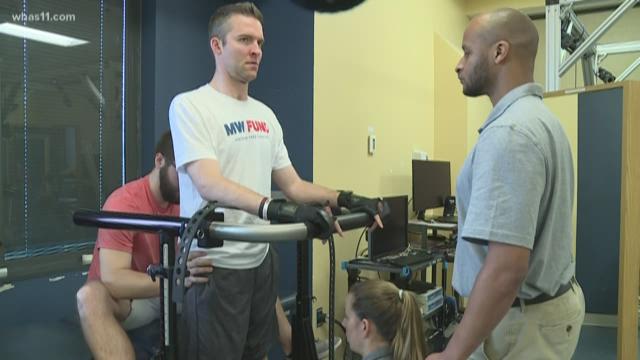 Before the physical training, each person has surgery for an electrode array to be placed on their lower spine.

“What we’ve noted from research is that all the centers, the circuitry for locomotion and standing is actually located in the lower spinal cord and that’s exactly the area that we target with the electrode.”

And why it’s working many don’t realize. When you have spinal cord trauma, everything above and below the injury stays intact.

“One of the things that we know is the spinal cord has this capacity so it’s just a matter of finding the correct combination of electrodes in the simulation and the training,” said Angeli.

Each person’s training looks different in the study, but as a whole, the stimulator focuses on the hips, knees, ankles, toes and is connected to a control device in the abdomen.

“Prior to I used to have a lot of muscle spasms, a lot of tightness, which is common with a high-level spinal cord injury, and it can be very uncomfortable a lot of nerve pain and when the stimulation is on, it takes a lot of that away,” Matt said.

And that isn’t Matt’s only success. He stands for two hours a day.

“Independently with my legs, and my trunk with only somebody spotting me at the hips for over an hour,” he explains. “Somebody with a C3 level spinal cord injury who was on a ventilator for the first month afterwards wondering if I would have a trache in my neck for the rest of my life I mean that’s a huge change.”

In order to be a part of the study, you must have a compromised cardiovascular system.

When an able-bodied person stands up too quickly, they get dizzy but their blood pressure evens out. When your system has been compromised it’s extremely difficult to do that.

Matt’s blood pressure stays at a healthy range while he stands for his two hours a day.

Model in wheelchair shares what it meant to be a part...