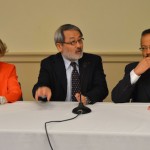 An array of techniques – some available now and others on the horizon – aim to restore movement and other functions in patients with spinal cord injuries.

A paraplegic wearing an Iron Man-like exoskeleton took the first kick of the World Cup soccer tournament during the opening ceremony in Sao Paulo, Brazil, a testament to recent advances in treating spinal cord injuries.

The robotic bodysuit took cues from the user’s brain activity to power his steps forward. It was developed by Brazilian doctor Miguel Nicolelis, who is on the faculty at Duke University, and more than 150 scientists from around the world.

Assistive robotics and other advances in treatment of spinal cord injury were discussed during an 11 June Capitol Hill briefing on “Rethinking Spinal Cord Injury,” the latest in a series of neuroscience briefings hosted by AAAS in conjunction with Rep. Chaka Fattah (D-Pa.), and through the support of the Dana Foundation.

He cited continuing refinements in the field of functional electrical stimulation (FES), in which electrodes from an implanted device deliver small pulses of current to nerves controlling specific muscles. When paralyzed hand muscles are stimulated, for example, a patient is able to grasp and hold objects such as a can of soda. The user controls the stimulation by contracting muscles that are not paralyzed. Stimulating the bladder or diaphragm can also return some bodily functions.

Researchers at Case Western Reserve University in Cleveland have developed a FES system that has allowed a patient to stand and take steps. She controls her movement by pushing a button on an external device. Researchers are exploring ways to get the instructions to stimulate muscles directly from the brain rather than from an external device. 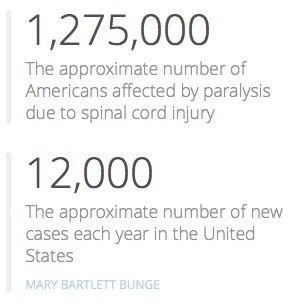 For example, research teams at Brown University and the University of Pittsburgh have shown that paralyzed persons with electrodes inserted into their brains are able to control robotic arms using her thoughts alone.

In discussing another emerging solution, Pettigrew praised the “rather remarkable report” in April by researchers at the University of Louisville, UCLA, and the Pavlov institute of Physiology in Russia who used implanted epidural spinal stimulation devices to enable four paraplegic men to voluntarily move their legs. Their ability to move their limbs improved over time with daily stimulation and training. The video of one subject showed an ability to remain standing with sufficient balance to throw a ball and play catch.

The study suggests that epidural spinal stimulation in conjunction with physical therapy can reprogram damaged nerves in the spinal cord so they regain the ability to receive stimuli. The researchers implanted the stimulators, originally designed for pain control, with electrodes placed on the surface of the lumbar spinal cord of each patient.

Rob Summers, the first patient in the study, described his experiences in a video that Pettigrew showed during the briefing. “It has completely changed my life,” Summers said. In addition to leg movement, he also has regained bladder, bowel and sexual function, even when the stimulator is turned off. His hope, he said, is that “in the next 10 years, my story will be just another regular story.”

“Even the researchers did not expect the dramatic improvement in voluntary function,” Pettigrew said.

As the study authors wrote in their article in Brain, “We have uncovered a fundamentally new intervention strategy that can dramatically affect recovery of voluntary movement in individuals with complete paralysis even years after injury.”

In addition to the bioengineering approaches, researchers also have been looking at drug therapies and regenerative approaches for addressing paralysis due to spinal cord injuries. According to Mary Bartlett Bunge, professor of cell biology, neurological surgery and neurology at the University of Miami’s Miami Project to Cure Paralysis, about 1,275,000 Americans are affected by paralysis due to spinal cord injury and about 12,000 new cases occur each year in the United States.

Dr. Wise Young of the W.M Keck Center for Collaborative Neuroscience at Rutgers University said several first-generation drugs do show some efficacy in treatment of spinal cord injury. Methylprednisolone (MP) can improve motor and sensory function by 20% when given within eight hours of the injury, he said, and monosialic ganglioside (GM1) can speed recovery from a partial spinal cord injury if given within 48 hours. Another drug, 4-aminopyridine, improves conduction in nerve fibers that have lost their insulating myelin sheaths, Young said, but it has yet to be shown effective in treating spinal cord injury. 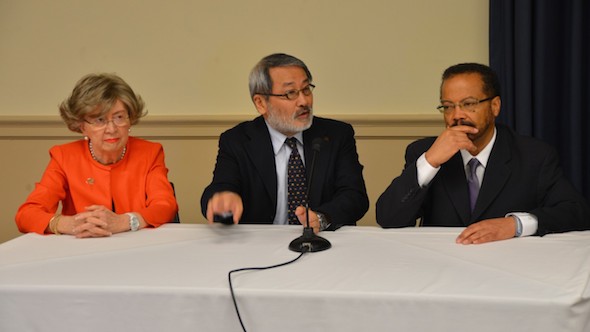 The cord blood cells are a source of various stem cells that can be useful in the repair and regeneration of tissues. Young and his colleagues at the China Spinal Cord Injury Network (ChinaSCINet) transplanted the cells into 20 patients in the Chinese city of Kunming who averaged 7 years after complete spinal cord injury. The cells were transplanted into the spinal cord above and below the injury site.

The patients received intensive walking training (six hours a day, six days a week for six months) in addition to the cell transplants. Within six to twelve months, Young said, 15 of the 20 patients were able to walk at least 10 meters with minimal assistance. Two of them could walk using only a four-point walker and no manual assistance. In addition, 12 of them no longer required assistance getting into and out of a wheelchair and getting onto the toilet. The results were better than expected, Young said, and additional clinical trials are planned.

Furthermore, imaging studies in two of five patients studied from 12 to 24 months after the cell implants showed evidence that fibers were growing across the gap at the injury site in the spinal cord, suggesting that a permanent repair of severed axons could be possible.

Another promising approach was described by Bunge of the University of Miami, who has been working for four decades to understand Schwann cells, which provide support and protection for nerve fibers in the peripheral nervous system. She and her late husband, Dr. Richard Bunge, proposed that Schwann cells could be a key to helping repair damaged spinal cords.

“Schwann cells promote regeneration in peripheral nerves of the arms and legs,” Bunge said. “Why not tin the spinal cord?”

In painstaking studies with rats, Bunge and her colleagues have shown that when Schwann cells are implanted in the spinal cord, they can form myelin around regenerated nerve fibers, or axons. The studies also showed some improvement in the animals’ ability to walk after paralysis. Bunge said a triple combination strategy, using a variety of growth factors and an enzyme to reduce scar tissue along with the Schwann cells, is one way to improve the repair process. The combination produces “myriads of myelinated axons,” Bunge said.

Based on her animal studies, Bunge received approval from the U.S. Food and Drug Administration in 2012 to undertake phase I (or proof of safety) trials using Schwann cells in humans with spinal cord injury. Transplants have been done on three patients so far, she said, and the procedure is safe. But it is too soon to make any assessment on efficacy in humans, she said.

Pettigrew said decades of research have led to techniques, such as epidural electrical stimulation, that show great promise. “We have something that works and we’d like to make that available to people who can benefit from it,” Pettigrew said. But he added, “These are expensive procedures to undertake” and there is a limit to the number of people who can take part in a clinical trial.

Since the epidural stimulation report was published in Brain, Pettigrew said, the authors and his institute at NIH have received more than 1,000 emails from patients seeking to participate in the study. But at an estimated cost of $500,000 per patient, he said, it is a challenge to greatly expand the size of the study. “We are looking at ways to increase access,” Pettigrew said, by partnering with other institutions and foundations that share the same goal.

“We also need more answers,” Pettigrew said. “Exactly what’s going on with these different approaches? Everything we’ve talked about so far, as regards to a scientific explanation, is largely hypothesis.” Observations suggest that the procedures have benefit, he said, “but we still don’t completely understand what the mechanism of recovery is.” That will require more research over the longer term, he said. In addition, technological improvements are needed to better control and monitor the stimulation.

Asked whether there may be ways to combine some of the most promising approaches, Wise said his group is considering using epidural electrical stimulation in some of the patients who receive umbilical cord blood cell transplants. “We would like to substitute electrical stimulation,” he said, for the intense and lengthy training in walking that has been part of the study regimen so far. Researchers also should explore such an approach in animal studies, he said.