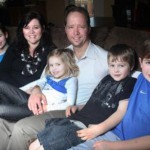 Robert Waddell says he’s glad the stem cells that healed him came from “a guy who was 50 years old” and not a human embryo.

As a Catholic, Waddell opposes the destruction of embryos and didn’t want to rely on embryonic stem cells to cure his kidney disease. But he avoided this moral dilemma by getting bone marrow stem cells from a friend who donated a kidney as part of a University of Louisville study.

“It has nothing to do with embryonic stem cells,” said Waddell, a 47-year-old father of four. “That made it a lot easier.”

Recent strides in stem-cell research show adult stem cells to be ever-more-promising, many scientists say, quelling the controversy steeped in faith and science that has long surrounded embryonic stem cells.

In fact, U of L researcher Scott Whittemore said the debate is almost moot.

“Realistically, (many scientists don’t use) the types of stem cells that are so problematic anymore,” he said, adding that adult stem cells can now be reprogrammed to behave like embryonic stem cells. “The field has moved so fast.”

In addition to these genetically reprogrammed adult cells — known as “induced pluripotent stem cells,” or iPS cells — scientists are on the cusp of being able to turn one type of cell into another in the body without using stem cells at all. They shared some of the latest research this week at the annual International Society for Stem Cell Research in Vancouver.

“IPS cells overcame the main ethical issues,” namely the use of embryos some Americans consider sacred human life, said Brett Spear, a professor of microbiology, immunology and molecular genetics at the University of Kentucky who uses iPS cells to model liver disease.

Dr. George Daley, director of the stem cell transplant program at Boston Children’s Hospital and past president of the research society, said embryonic cells are a tool in the search for cures.

While all stem cells offer the possibility of a renewable source of “replacement” cells and tissues, the various types promise to treat different conditions. “These are all different approaches,” he said, “and they are complementary, not competitive.”

Waddell, who suffered from polycystic kidney disease, was successfully weaned off all anti-rejection medicines a year after his kidney transplant in 2009.

“Hopefully, my kidney will stay healthy in the long run,” he said. “Right now, I feel better and younger than I did before.”

Scientists first discovered ways to take stem cells from mouse embryos in 1981, and 17 years later learned how to derive them from human embryos and grow them in the lab. They come from eggs fertilized not in a woman’s body but in in-vitro clinics, which are then donated for research instead of being stored or destroyed.

These cells, from days-old embryos, give rise to every organ and tissue in the body, and as such “were the gold standard for all stem cells,” said Daniel Peterson, director of the Center for Stem Cell and Regenerative Medicine at Rosalind Franklin University in Chicago.

But besides raising ethical concerns for many, doctors say embryonic stem cells pose practical problems. Biologically, they may spark tumors or be rejected by the body because they do not come from the patient.

And researchers faced limits on studying them for years. President George W. Bush restricted federal funding to a small number of embryonic stem-cell lines created before Aug. 9, 2001, a policy that President Barack Obama overturned in 2009.

Meanwhile, progress continued unabated on adult stem cells, which come from many places in the body — such as the brain, bone marrow, blood vessels and skin. Their primary role is to repair the tissue in which they are found.

Ildstad’s research, one of the most high-profile local efforts using adult stem cells, aims to give organ transplant recipients a combined immune system so their bodies don’t reject donated organs. It also offers a potential cure for sickle cell disease by making bone-marrow transplants safe enough to be used beyond the small portion of patients with perfectly matched donors.

Other local research with adult stem cells helps heart attack victims. U of L’s Dr. Roberto Bolli is partnering with Dr. Piero Anversa of Brigham and Women’s Hospital in Boston to use adult cardiac stem cells on patients who have had heart attacks, and have found that patients treated with their cells had greater pumping power.

But scientists have tended to view the potential of adult stem cells as limited, thinking they could only become types of cells within the tissue where they originated, meaning a stem cell within the heart could be a heart muscle cell but not a brain cell.

Human iPS cells, which first came on the scene in late 2007, promise to change all that because they seem to offer all of the benefits of embryonic stem cells and none of the drawbacks. They come from a patient, so they don’t raise ethical issues or bring the risk of rejection that cells from outside the patient would bring.

Scientists say far more research is needed, but many are using iPS cells to create “diseases in a dish” that can be studied or used to test drugs. They envision someday using these cells in transplants and to treat diseases ranging from Alzheimer’s to Parkinson’s to cardiovascular disease and diabetes.

“IPS cells are certainly all the rage,” Daley said. “For all intents and purposes, they are the equivalent of the embryonic stem cells.”

“If they can (forge ahead with them), I don’t know why they wouldn’t,” said Martin Cothran, a senior policy analyst with the Family Foundation of Kentucky who said even using existing stem cell lines that can be traced to human embryos is unethical. “This has to do with human life.”

“The embryonic variety are much more hard to control,” he said. “The adult stem cells have more stability.”

Embryonic stem cell research also raises questions about informed consent, he said. While the parents who produce embryos donate them for research, he said they can’t give valid consent “for something to be done to their children that would kill them in order to help others.”

Richard Doerflinger of the U.S. Conference of Catholic Bishops said the new developments bear out what he told a congressional hearing on stem cell research in 1998. “We felt that pursuing research that required destroying embryos was ethically wrong,” he said. “It could be pursued in other ways, and those ways are equally promising.”

But some scientists and groups advocating for cures say they don’t want to close the door to embryonic stem cell research because it may offer the best hope for people with certain conditions, such as Type I diabetes.

The advocacy group Stem Cell Action Coalition said scientists are studying these cells to treat a host of other diseases, too, such as multiple sclerosis, cancer, heart disease, spinal cord injury, stroke, blindness, AIDS, Parkinson’s disease and Alzheimer’s. They say patients have already benefited from embryonic stem cell treatments for conditions that can lead to blindness.

“I’m not one who says we can just turn our backs on embryonic stem cells. … I don’t know what will prove most effective in the clinic,” Daley said. “We’re going to see a whole bunch of things from iPS cells, and I bet we’ll see some from embryonic stem cells. It’s still very early in the field.”

Bill Murphy, co-director of the Stem Cell & Regenerative Medicine Center at the University of Wisconsin-Madison, where the first human embryonic stem cells were isolated, agreed.

“The advances in human iPS cells are really quite exciting,” he said. “But I would say there’s remaining value in human embryonic stem cell research.”

Scientists say it’s difficult to predict what will happen in the future, since the field is still changing rapidly. Whittemore said some of the most innovative work involves using protein “factors” to turn one type of cell into another — say, a skin cell into a neuron. “That way,” Whittemore said, “you’re skipping the stem cell step.”

Despite all this progress, Daley said people shouldn’t expect widespread cures from the latest advances soon.

“I can’t say there are going to be cures in two to five years, but I see them in the future,” he said. “In 25 years, it could be a whole new world.”

What are stem cells? Stem cells have the potential to develop into many different cell types in the body. They are capable of dividing and renewing themselves for long periods of time and are “unspecialized,” meaning they do not have the structures of a particular tissue that allow them to perform a specialized function, such as pumping blood.

What are adult stem cells? Adult, or somatic, stem cells come from a patient. Their primary role is to repair the tissue in which they are found. Such cells have been identified in many organs and tissues, including the brain, bone marrow, blood vessels and skin.

What are induced pluripotent stem cells? So-called iPS cells are adult cells that have been genetically reprogrammed to an embryonic-like state. These cells are used to develop drugs and model diseases, and scientists hope to use them in transplant medicine.

What are some potential uses of stem cells? Because they can be coaxed into becoming specific cell types, stem cells offer the possibility of a renewable source of “replacement” cells and tissues to treat conditions such as Alzheimer’s disease, spinal cord injury, stroke, burns, heart disease and diabetes.

The tremendous spirit of tetraplegic Catriona Williams – who defies odds...