Wheelchair rugby a family affair for mom and son 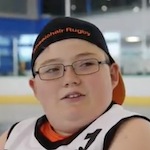 Berni Quist choked back tears as her shy, 11-year-old son, Josh Dyck, guided his wheelchair out to centre court Thursday at the Richmond Olympic Oval.

The youngest wheelchair rugby player in North America was honoured at the opening of the Canada Cup international tournament. The beaming kid, wearing his KOs jersey that’s Kelowna/Okanagan, and pronounced chaos and a ball cap turned backwards, was given a game ball and sweatshirt by veteran national team player Garrett Hickling, who also grew up in Kelowna.

“Definitely emotional,” said Berni, dressed herself in a KOs jersey.

“But rugby players don’t cry, right?” she added with a laugh.

Josh was just three when his spinal cord was severed at the C6-C7 vertebrae in a horrific car crash. He became an incomplete quadriplegic, one of the youngest ever in Canada to survive that level of spinal cord injury.

It’s amazing, said Berni, to see how far Josh has come, “and where he can go.

“You think it’s a death sentence being put into a chair, but it’s really not. Just get out there and do things.”

Berni should know. At 29, she sustained a spinal cord injury herself in that same crash in October 2006. Today, she uses a chair herself as a functioning paraplegic.

Berni, Josh and Josh’s stepfather, Wes Quist, were driving home to Kelowna from Summerland when their car was struck head on by another vehicle. Berni, who was in a coma for 13 days, sustained major internal injuries; Wes had several broken bones and nearly had to have his left foot amputated.

“It was horrible,” says Berni. “I couldn’t get to Joshua for five months because I was in a different hospital than him. It was heartbreaking. My nurses had to calm me down quite often because I just longed to be there.

“You wake up from a coma and are told your son is a quadriplegic, probably won’t speak, won’t be able to say your name ever again … they told me lots of things and Josh has proven them all wrong. It’s remarkable how far he’s come.”

Josh can certainly speak, but like most 11-year-olds put in a position of answering questions from a reporter, he didn’t say a lot Thursday. Overwhelmed somewhat by the attention and the occasion, it was mostly one-word or one-phrase answers.

The toughest thing about being a kid in a chair? “Fitting in,” he says.

Fortunately, he’s found a way to do that by joining the fledgling wheelchair rugby program in Kelowna. It was started a couple of years ago and Josh and his mom — yes, it’s a coed sport — began playing together a year ago.

Invented in Canada and initially called murderball, the sport combines elements of basketball and handball and is more fast-paced than you might imagine. Teams of four, playing in specially-designed, bumper car-like chairs, bash-and-crash into opponents while trying to advance a carried volleyball across a scoring line. 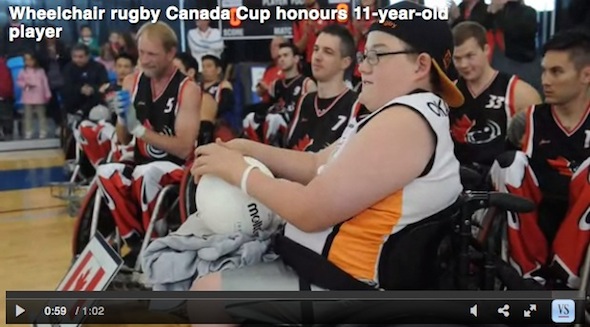 Berni says she and Josh were instantly hooked when they began playing. Both say the biggest appeal is the physical nature of the sport, being able to slam your chair into somebody else.

“I love the hitting part of it,” says a grinning Berni. “Who would think, but I just love it.”

Occasionally, if you catch an opponent at just the right angle and hit them hard enough, you can actually topple him/her over.

“Almost,” says Josh when asked if that’s happened to him yet. “The closest I came was up on one tire.”

Eight countries are competing at the Canada Cup. Seven of them will be heading to Denmark in August for the world championships.

“It’s amazing,” says Berni. “I’m very much looking forward to seeing the different calibre from the rec league that we play in to this level.”

While Josh swims and has tried wheelchair tennis, it’s playing with the eight or nine adult rugby players in Kelowna that has helped him become more engaged.

“It’s opened up his world,” says Berni. “He’s not as shy as he was. He’s met a lot of other quadriplegics. There’s some age difference between them, but they’re like older brothers to him.

Earlier this year, Josh, a Grade 6 student, brought his KOs team to his school for a demonstration. “Everybody loved it.”

Berni said the team “had a blast” at the school. “The kids said it was bumper cars on steroids.”

“He’s got a great future in front of him. It’s all up to him, being so young he can take it to whatever level he wants to down the road.”

While Josh gets plenty of support from the wheelchair rugby players in Kelowna, he’s also taken advantage of a peer counselling program run by Spinal Cord Injury B.C. James Hektner, a paraplegic who co-ordinates the program in the Okanagan, is a counsellor to Josh, taking him for outings, including junior hockey games.

Berni, whose family recently moved into a more wheelchair friendly home, complete with an elevator and a private bathroom for Josh, says the peer counselling has been invaluable.

“He can ask (Hektner) the hard questions about what life is going to be like in a chair as he gets older and matures. We were lost and needed some form of peer. Once that happened, it opened up our world. If it’s not rugby, find something that’s peer-related.”

Hektner says it takes a whole community to help somebody like Josh. The rugby has been essential to his growth, he says, but “over the next few years adolescence is going to be a bit of a struggle for him.”

Says Josh of Hektner’s counsel: “He’s been really helpful, showed me a lot of tricks and stuff.”

From over her shoulder, Berni nods silently. Eight years after hearing some of the most devastating words a mom can imagine about her three-year-old, she knows her Josh is going to be OK.