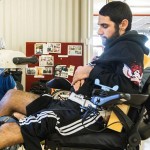 VICTORIAN medical researchers are embarking on a range of exciting trials to improve the lives of people with quadriplegia and prevent the severity of new spinal cord injuries.

Among the projects under way are: electrically stimulated exercise, a sunshine pill and oxygen mask to stop their brain fog and a robotic arm that offers independence.

SpinalCure CEO Duncan Wallace said it was important not to provide false promise, but there was no such thing as false hope.

He believes researchers are on the verge of exciting breakthroughs as early stage science moves into human trials.

“If people keep themselves fit with exercise programs and stay healthy, then they are going to be in much better shape to make use of therapies when they become available.”

That’s where the work being done by Austin Health, the University of Melbourne and the

Florey Institute of Neuroscience and Mental Health comes into play.

He believes using new technologies and rehabilitation could make an enormous difference to the lives of those with quadraplegia.

He discovered people with quadriplegia were more likely suffer from obstructive sleep apnoea, where the throat narrows and closes during sleep, and could lose normal melatonin rhythms.

“It’s like they are jetlagged all the time,” he said.

But his new research shows that pills of melatonin (the sunshine hormone) may improve sleep.

Steve Perkis, 22, is taking part in several of these trials in the hope it will help him, or the next person in his position.

The carpenter has quadriplegia, with loss of movement in his legs and hands, but not his arms, after a somersault in March.

It has allowed around 10 people with quadriplegia to regain some use of their arms and hands.

One trial uses a headset to deliver electrical stimulation to the hand muscles when wearers click their jaw, allowing participants to grasp objects.

Another gets patients to cycle in bed soon after injury, by electrically stimulating their thigh muscles, while a separate project explores the benefits of full body exercise using assisted cycling and walking.

Then there are projects that could offer greater independence, like Melbourne entrepreneur Marita Cheng’s robotic arm, which is programmed to perform tasks like taking medication or opening doors when the user taps the iPhone or iPad.

There are also moves to reduce the severity of new spinal cord injuries, with Queensland Brain Institute director Professor Perry Bartlett confirming the first human trials of a drug to help nerve regrowth should start within 12 months.

The drug is based on a world-first breakthrough made by Victorian and Queensland scientists more than a decade ago that blocking a molecule called EphA4 sparks regrowth of spinal nerves in mice.

Another bold plan, led by The Florey and Austin Health neurologist Dr Peter Bachelor, is to cool spinal cord injury patients within two hours of their injury.

This technique aims to prevent further damage to the spinal cord, which compresses after injury, buying patients more time to undergo decompression surgery.

CRITICAL STEPS TOWARDS A CURE FOR SPINAL INJURIES

A robotic arm controlled by an iPhone and iPad that will help spinal cord injury patient’s move and grip objects is being tested in Melbourne.

A new Australian drug aiming to prevent loss of nerve tissue and promote repair after injury will enter human trials within 12 months.

A headset that delivers electrical stimulation to hand muscles allowing people to use their hand is being tested by Melbourne University and Austin Health.

Austin Health is leading an international trial to see if they can reduce the impact of sleep apnoea and boost brain power using a sleep mask and sun hormone pills.

Electrical stimulation to the muscles of the thigh that enables them to cycle on a bike is being used to see if it can stop muscle wastage and improve general health.

Giving patients with spinal cord injuries full body exercise on a treadmill and with electrical stimulation-assisted cycling to see if it can improve their function.

The surgery can lead to increased reach, grasp and release and increased independence for patients.

A trial with the University of Melbourne will work out which patients are eligible for the surgery, optimal surgery timing and a cost-benefit analysis.

A program that teaches fitness trainers how to cater for spinal cord injury patients has been developed to try to improve their access to community gyms. A full assessment is underway, but preliminary results show it is helping overcome barriers and improving the physical health of patients.

Singing classes were trialled to boost people with quadriplegia’s ability to breath and project their voice.

Their main breathing muscles do not work, putting them at risk of chest infections and pneumonia and making it hard to heard in loud environments.

The trial found that it not only boosted their voice projection, there were trends to show that it could help breathing and it also was a helpful social outlet.

There are still hurdles to overcome for people with spinal cord injuries to return to work, but Austin Health and LaTrobe University’s Gilliean (CORRECT) Hilton is hoping to improve this with two research projects to assess the current services provided to Victorian patients and an in-depth study of 30 people with quadriplegia to assess their experience of seeking, gaining and maintaining employment.

Melbourne University and Austin Health is about to start clinical trials of a drug to help spinal cord injury patients get better control of their bowel functions.

Spinal cord injury patients will be cooled temporarily so they have more time to get spinal cord decompression surgery.

The trial, led by the Florey Institute of Neuroscience and Mental Health neurologist Dr Peter Batchelor, will involve paramedics cooling patients by two degrees within two hours of their injury.

A 24-hour study revealed that spinal cord injury patients have a reversal of blood pressure- it’s too high at night and dangerously low during the day.

They are now giving people with quadriplegia drugs to raise their blood pressure during the day and trying to reduce the high blood pressure overnight.