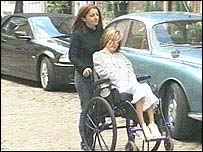 A teenager who was paralysed from the neck down in a car accident has taken her first steps – despite being told she would never walk again.

She was told she would always be reliant on a Ventilator and a wheelchair.

Gemma said it felt “amazing” to be able to walk again.

You couldn’t really call it a therapy for spinal injuries in general John Cavenagh, Spinal Research
Gemma was injured in an accident in north Wales in June 1992 when she was travelling in a car with her father and her sister Gillian.

Gillian suffered a broken back but has since recovered. Gemma suffered a severed spinal cord and was told she would not be able to move anything below her shoulders.

She told BBC News Online that she had never given up hope she would be able to walk again.

“I’ve always been looking at ways of getting back on my feet.”

Gemma began to make progress when she started a form of body and mind therapy called Mind Instructor in February this year.
I still have a lot of work ahead of me
Gemma Quinn
She moved down to London in order to concentrate on the therapy which involves intensive mental exercises, such as focussing on feeling her toes, as well as physical exercises.

“I was quite surprised as I was practising standing and it was a surprise for everyone, including myself.

“But it just came quite naturally.”

Gemma, who was awarded a Child of Courage award in 1996, has written a letter of support to actor Christopher Reeve who suffered a similar injury to hers.

She said: “The first time I walked, it was just a couple of steps, the following day it was six. The most I’ve managed is around 20 steps.

“I still have a lot of work ahead of me, but I’m more confident than ever now.”

She has been treated at the Mind Instructor clinic in London by instructor Hratch Ogali. The therapist said Gemma was an “amazing woman”.

For her father Mike’s recent birthday, Gemma put together a video in which she cycled, kicked a ball, and took her first steps.

She said: “I decided to make the tape to show him my progress and on the very first day I took the steps. He was so excited for me.”

Gemma says she does not bear any grudges against the doctors who said she would never walk again.

“I think the results speak for themselves.”

But John Cavenagh of the Spinal Research Charity told the BBC: “It’s very good for Gemma that she’s been able to stand up after all these years, but you couldn’t really call it a therapy for spinal injuries in general.

“Really what it’s probably doing is unlocking some residual function that she has, that she hasn’t been able to make use of before.”
Story from BBC NEWS: