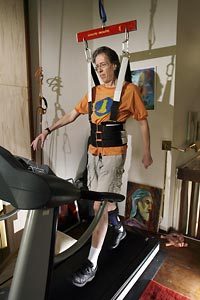 On March 7, 2001, Bruce Hanson, all 6 feet and 5 inches of him, found himself lying on his back in the snow at Alpental.

It was a clear and brilliant afternoon, and Hanson was supposed to be skiing the final run of the day with his 10-year-old daughter, Heather.

Instead of schussing down the slopes, his skis were above his head, aligned with the tops of the trees. Hanson remembers knowing that he’d broken his neck because he couldn’t feel his legs.

A doctor later told him that his injury resembled the kind once inflicted by the mafia — a partial severing of the spinal cord designed to maim, but not to kill.

He mourned the loss of his legs as if grieving a loved one’s death, with anger, Denial, bargaining and Depression.

The accident hurt more than his body. It pressed down hard on weak spots in his marriage, strained relations with Heather and the couple’s younger daughter, Emily, and stunted Hanson’s growth as a conceptual artist with a brand-new master of fine arts degree.

It also earned him admission into a club he never knew existed.

Each year, more than 10,000 Americans sustain spinal-cord damage. Most are young men injured in car accidents or on the sports field.

Hanson’s age, 45, was one thing that set him apart from the others.

Luck was another. That day on the mountain, a doctor happened to be the first responder when Heather called for help. In the helicopter on the way to Harborview, Hanson got a shot of the steroid methylprednisolone, an emerging treatment.

Perhaps most important, he had the financial and emotional wherewithal, as well as the will, to do whatever it took to walk again.

Hanson’s insurance policy gave him $2,000 worth of rehab, about 10 visits, barely enough time to learn to transfer himself in and out of his wheelchair.

His parents paid for the rest, about $42,000, so that for two hours a day, three days a week, for more than two years, Hanson could work out at a Harborview/University of Washington outpatient Rehabilitation center. His wife, Kate Willette, and a group of friends took turns ferrying him from the family’s Newport Hills home in Bellevue to campus.

In a spinal-cord injury, the path from the brain to the limbs is damaged. But scientists discovered that electricity can move the muscles even when the mind can’t. Therapists place pads with wires on the patient’s legs, delivering shocks so, for example, the patient can push the pedals of a specialized exercise bike.

This sort of rehabilitation, still relatively new, was used to treat the world’s most famous quadriplegic, Christopher Reeve.

Hanson used it, too. He even flew to Florida in the spring of 2004 and spent 11 weeks in a clinical trial at University of Florida to demonstrate the effects of body-weight-supported treadmill walking on those with spinal-cord injuries.

At his home, remodeled to accommodate a wheelchair, Hanson rigged a contraption that hangs from the beams and helps him support his weight so that he can walk on a treadmill.

The treadmill is an apt metaphor for Hanson’s predicament, since he likens rehab to running marathon upon marathon, with no end.

There are miles to go, even yet.

Hanson’s personal struggle has, in recent years, turned increasingly political. As a board member of the Redmond nonprofit NextStepsNW, which provides exercise therapy for people with paralysis, Hanson is acutely aware that exercise therapy is an advantage many others with spinal-cord injuries don’t have, either because they don’t know about it or can’t afford to pay for it themselves.

The general rule of thumb for spinal-cord-injury patients is that whatever sensation returns after six weeks is all they will ever get. Prolonged exercise rehabilitation is not the norm, and it’s rarely covered by insurance.

But Hanson believes it should be.

This weekend, he and his wife and daughter Heather will join others with spinal-cord injuries in Washington, D.C., to lobby lawmakers to pass the Christopher and Dana Reeve Paralysis Act. The act would create clinical trials to prove what Hanson and others in the spinal-cord-injury community say they already know — that people with little or no sensation in their muscles can and should move them anyway.

They also will lobby for a bill that would allow some embryos to be used in federally funded stem-cell research to cure paralysis.

The couple moderates a Web site for people coping with spinal-cord injuries, helping to connect them with advice on everything from how to use a Catheter on an airplane to how to rig one’s own exercise equipment.

To help others understand the experience of paralysis, Willette wrote “Some Things Are Unbreakable,” a day-by-day account of the aftermath of her husband’s accident and its impact on the family. She published the book through an online publishing service.

The book is unflinching in its description of the family’s experience, from the toll it took on their marriage to Willette’s guilt over “ignoring” her daughters as she struggled to care for her husband, and even the indignities Hanson faced being unable to control his bowels.

Hanson did walk again. This weekend, after getting off an airplane with the aid of his cane, he’ll ascend the steps of the Capitol to tell them exactly what it took to get there.

Kate Willette’s book “Some Things are Unbreakable” is available at several local bookstores and at www.lulu.com. Willette and Bruce Hanson are moderators for a CareCure forum at http://sci.rutgers.edu.