Exercise brings hope to those paralysed by spinal injuries 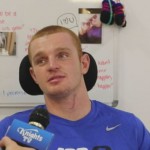 Exercise therapy research at the University of Newcastle has brought profound improvements to limbs that were paralysed, doctors say.

Neurophysiologist Dr Michelle Rank believes exercise is more beneficial than any other therapy currently available, even for patients with long-term injuries.

“We’re addressing what’s happening in the spinal cord to see how we can make messages from the brain pass more effectively to the command muscles,” Dr Rank says.

“Just as the brain has plasticity after injury, it appears that nerve fibres are sprouting to create new pathways around the injury.

“We’ve seen some profound improvements, with limbs that were originally paralysed getting a better range of motion and more normal movement.”

The researcher says arm exercises can even improve recovery in lower limbs, so it seems the exercise has a systemic effect on the body.

The project, titled “The effect of exercise training on interneurons after incomplete spinal cord injury”, has produced the first electro-physiological evidence of its kind, and recently won a major research award.

“Messages from the brain have difficulty getting to the muscles because the pathway is interrupted, and muscles tend to have atrophy because they’re not being used,” she says.

The doctor is now aiming to define the best types and durations of exercises, as well as the best time to start the training after the injury.

“Our results so far have demonstrated that just three weeks of treadmill training selectively strengthens the neural connections around the spinal cord injury site.”