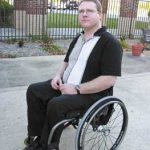 Camden County, Mo. – It’s the simple things in life that frustrate him the most – changing a light bulb, visiting friends and running errands now have to be planned out.

Rusty Burris is a Paraplegic, bound to a wheel chair from a spinal cord injury.

Voted by his classmates at Macks Creek as Most Friendly, Burris was looking forward to the summer of 1990 until his life changed forever.

About one-minute away from home, he fell asleep behind the wheel and ran off the road. With no seat belt on, he was thrown from the car.

“I got to spend my first summer out of high school at the University of Columbia hospital,” he said.

He’d heard the message before: Don’t drink and drive. So he didn’t.

He was usually pretty good about wearing a seat belt, but this time he had not buckled up.

“I was one of those that thought it will never happen to me. I wasn’t a risk taker or an adrenaline junkie like a lot of my other friends,” Burris said.

He had just left a family reunion with his girlfriend and dropped her off at midnight.

“All of a sudden, I had to start all over again. Every aspect of my life changed. I went from being a vibrant 18-year-old to paralyzed and not being able to walk.”

Burris is now involved in a trauma prevention program called ThinkFirst Missouri. He teaches young people about the importance of making safe choices.

“ThinkFirst came to my school when I was a teenager. The very program that I teach, I saw in my school, but I was one of those that thought it will never happen to me.”

Burris says he is living proof that choices can have a lasting impact.

It’s his turn to spread the word about consequences. He works to encourage teens to think about the choices they make.

“They are not invincible. The most dreaded thing that they can think is it can’t happen to them. It doesn’t matter how many times you do something and get away with it, it’s the time that you don’t and you end up paying for it the rest of your life.”

There are some positive outcomes he’s heard by sharing his story. The time when the message sunk in and someone wore their seat belt or stopped to think about getting in the car with a drunken driver.

“It does get discouraging at times when you see how the kids behave. You see it all the time and it’s like ‘is anyone listening?’ We can’t change some people, so we are out to change the ones we can.”