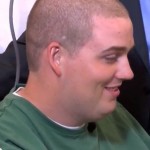 For the first time ever, a paralyzed man can move his fingers and hand with his own thoughts thanks to an innovative partnership between The Ohio State Univ. Wexner Medical Center and Battelle.

Ian Burkhart, a 23-year-old quadriplegic from Dublin, Ohio, is the first patient to use Neurobridge, an electronic neural bypass for spinal cord injuries that reconnects the brain directly to muscles, allowing voluntary and functional control of a paralyzed limb. Burkhart is the first of a potential five participants in a clinical study.

“It’s much like a heart bypass, but instead of bypassing blood, we’re actually bypassing electrical signals,” says Chad Bouton, research leader at Battelle. “We’re taking those signals from the brain, going around the injury, and actually going directly to the muscles.”

The Neurobridge technology combines algorithms that learn and decode the user’s brain activity and a high-definition muscle stimulation sleeve that translates neural impulses from the brain and transmits new signals to the paralyzed limb. In this case, Ian’s brain signals bypass his injured spinal cord and move his hand, hence the name Neurobridge.

Burkhart, who was paralyzed four years ago during a diving accident, viewed the opportunity to participate in the six-month, FDA-approved clinical trial at Ohio State’s Wexner Medical Center as a chance to help others with spinal cord injuries.

“Initially, it piqued my interested because I like science, and it’s pretty interesting,” Burkhart says. “I’ve realized, ‘You know what? This is the way it is. You’re going to have to make the best out of it.’ You can sit and complain about it, but that’s not going to help you at all. So, you might as well work hard, do what you can and keep going on with life.”

This technology has been a long time in the making. Working on the internally-funded project for nearly a decade to develop the algorithms, software and stimulation sleeve, Battelle scientists first recorded neural impulses from an electrode array implanted in a paralyzed person’s brain. They used that data to illustrate the device’s effect on the patient and prove the concept.

Two years ago, Bouton and his team began collaborating with Ohio State neuroscience researchers and clinicians Ali Rezai and Jerry Mysiw to design the clinical trials and validate the feasibility of using the Neurobridge technology in patients.

During a three-hour surgery on April 22, Rezai implanted a chip smaller than a pea onto the motor cortex of Burkhart’s brain. The tiny chip interprets brain signals and sends them to a computer, which recodes and sends them to the high-definition electrode stimulation sleeve that stimulates the proper muscles to execute his desired movements. Within a tenth of a second, Burkhart’s thoughts are translated into action.

“The surgery required the precise implantation of the micro-chip sensor in the area of Ian’s brain that controls his arm and hand movements,” Rezai says.

He says this technology may one day help patients affected by various brain and spinal cord injuries such as strokes and traumatic brain injury.

Battelle also developed a non-invasive neuro-stimulation technology in the form of a wearable sleeve that allows for precise activation of small muscle segments in the arm to enable individual finger movement, along with software that forms a “virtual spinal cord” to allow for coordination of dynamic hand and wrist movements.

The Ohio State and Battelle teams worked together to figure out the correct sequence of electrodes to stimulate to allow Burkhart to move his fingers and hand functionally. For example, Burkhart uses different brain signals and muscles to rotate his hand, make a fist or pinch his fingers together to grasp an object, Mysiw says. As part of the study, Burkhart worked for months using the electrode sleeve to stimulate his forearm to rebuild his atrophied muscles so they would be more responsive to the electric stimulation.

“I’ve been doing rehabilitation for a lot of years, and this is a tremendous stride forward in what we can offer these people,” says Mysiw, chair of the Department of Physical Medicine and Rehabilitation at Ohio State. “Now we’re examining human-machine interfaces and interactions, and how that type of technology can help.”

Burkhart is hopeful for his future. “It’s definitely great for me to be as young as I am when I was injured because the advancements in science and technology are growing rapidly and they’re only going to continue to increase.”