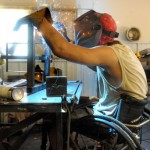 Hrabik, of Sedgewickville, Missouri, rolls over in his wheelchair and scratches his scruffy beard, admiring his custom-built rally car. He pats the hood proudly with a heavy, oil-stained hand.

But that doesn’t mean it can’t compete, he explains. Rally car racing is a gritty, high-octane tear through the backwoods that sends racers hurtling over county roads, kicking up roostertails of dust and gravel at highway speeds or faster.

“Power means nothing,” he says. “It’s all about driving skill.”

For gear heads such as Hrabik, the allure is irresistible, which is why he’s using his Impreza as a vehicle to help others.

Ten years ago, a car accident put him in a wheelchair at age 18, unable to walk or close his left hand. But since then, he’s started his own metalworking business, which he’s used to fund his passion for rally car racing as well as sky diving, kayaking and scuba diving.

Hrabik’s neighbor, Sid Bollinger, said he stops by to help whenever Hrabik asks him, but Hrabik can usually handle his tasks himself.

“I think he’s amazing for what he gets done,” Bollinger said.

Hrabik has done more with one hand than many of his uninjured contemporaries, which is why he decided to start working with patients who recently sustained spinal cord traumas. He remembers what it was like to be in their position and how long it took to figure out what to do.

“You’re only alive for a certain period of time, and I wish I would have had some of those years back,” he said. “But I’ll take what I’ve learned and share it, so it hopefully won’t take 10 years for them to get there. Pay it forward, you know?”

It’s something Hrabik didn’t think would happen. He never aspired to be a motivational speaker.

Quite frankly, he didn’t like motivational speakers very much. They didn’t hold his interest. He dozed through presentations in high school and couldn’t abide the ones who visited him after his accident. They tried introducing him to career options in information technology. They assured him there was no reason why he couldn’t have a fulfilling future. Then they showed him a minivan with hand controls.

Hrabik, then 18, was mortified. It was a minivan, for Pete’s sake. A fulfilling future in computer programming was beginning to seem hopelessly banal.

Hrabik decided there had to be more. He liked working with his hands. He liked building things. He liked cars that were not minivans. So instead of doing what they said he could do, he decided he would do what he wanted to do. Simple as that. His speaking aspirations are rooted in his desire to help show people they can do what they want to.

“I wouldn’t settle for that, and I know I’m not the only one,” he said.

That’s what his message boils down to: Figure out what you want to do, then figure out a way to do it.

“It takes me a little longer to get stuff done. What takes me a week maybe takes someone else three days,” he shrugs. “But I figure things out. That’s what I do. I fail plenty; I just work really hard.”

It’s that combination of teenage-rascal vitality and ironclad work ethic that enables Hrabik to operate a metalworking shop with not much more than one hand and a roll of duct tape. And it’s all to support his rally car obsession, which can get expensive.

“When I started Applecreek Metalworks, I had 20 dollars in my pocket,” he says wryly. “Now I’ve still got 20 dollars, but I also have a rally car.”

But Hrabik says rally racing is worth the investment.

“When I finished my first race, I wasn’t thinking of how hard it was getting there,” he says. “That was in the past. That was history.”

The importance of perseverance will be one of the things he’ll try to help spinal patients understand.

“People need to focus on the end result, not on how hard it’s gonna be getting there,” he said. “I want people to go out and do their passion well and be serious about it.”

For Hrabik, that passion is rally car racing.

“Once I got back in a car, I realized it wasn’t gonna be cheaper than therapy, but it was definitely better than therapy,” he said. “I want to give [people] the chance to see that it’s not just computer programs and minivans, like they’re all talking about.”

Hrabik also plans to speak to high school students about wearing seat belts. He wasn’t wearing his when the truck he was riding in rolled, but safety now is a priority in the car.

“For the high-schoolers, the race car is really just the attention-grabber; something to get them engaged,” he explained.

The purpose is to demonstrate the importance of traffic safety and the extensive measures Hrabik takes to ensure he doesn’t get hurt again.

Hrabik’s co-driver, Jason Amschler, said Hrabik’s concern for safety is one of the things that convinced him to ride along and read maps during races. At first he was wary; he, too, had been badly injured in an accident.

“He kind of went overboard with the safety thing,” Amschler said. “When I saw how well-built the roll cage was, then I agreed.”

The roll cage, or custom-built frame, in Hrabik’s car was so impressive that Sides Steel, Appleton Mercantile, Plaza Tire and K Sport all agreed to sponsor Hrabik in one way or another even before he had run his first race.

“They didn’t know if I’d be real slow, or if I’d wrap it around a tree,” he said, “But they knew my work ethic, and they knew I could do it.”

People began telling Hrabik how inspirational they thought his story was. The thought hadn’t occurred to him.

“I wanted to start rally car races for more or less selfish reasons. I was doing it because that’s what I wanted to do,” he said. “But now … I can talk about all the cool stuff I’ve been able to do and that might be inspirational.”

Saint Francis Medical Center agreed to put him through training to be a motivational speaker. He recently spent three days learning how to communicate effectively with the newly injured.

“I was able to meet a lot of the physical therapists and did a lot of networking,” he said.

He’s excited about being able to work with people who face circumstances he knows all too well.

“If their doctors allow it, I’d love to let them drive the car around. It doesn’t bother me none,” he said. “Who knows? Maybe they’ll go out and build a race car and whoop me. That would be great.”

Facebook
Twitter
Email
Mix
Digg
Previous articleZina Hermez – My book, Not Without God: A Story of Survival has been published!
Next articleQuadriplegic Perry Cross on why he travels to India as a ‘stem cell tourist’ to find a cure for paralysis