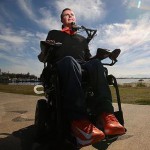 PERRY Cross was just 19 when he suffered a devastating neck injury that should have killed him.

Doctors told his family he had months to live, and if he survived beyond that the best he could hope for as a quadriplegic was just 10 years.

Now almost 20 years later, Mr Cross is still cheating death after a rugby accident that left him unable to walk, talk, eat, move his head or even breathe without the help of a respirator.

“When I got injured, I lay there on the ground, I looked up at the sky, and I knew straight away what had happened,” he writes on his website.

“You don’t have to be a neurologist to understand that when you break your neck you’ve done something pretty bad.”

That was just the start of a long and gruelling path to recovery, which saw him spend eight months in hospital learning how to use his very limited movements.

Now, every day he lives is a bonus but is full of daily struggles that most of us take for granted, including getting out of bed, brushing his teeth, eating and going to the toilet.

In fact, everything he does is thanks to a dedicated team of carers and family.

But the 39-year-old admits he is laying his life on the line and cheating death by travelling to India to have stem cell treatment, which he told news.com.au was his only hope to stay alive.

Unavailable in Australia, Mr Cross and his carers are forced to fly to India for the controversial stem cell treatment, which has resulted in him being able to breathe unaided, although he still needs a respirator when he gets tired.

He has even regained some sensation in his right shoulder.

The Gold Coast man said he was inspired to walk again after meeting superman figure Christopher Reeve in 1997, who told him there would one day be a cure for paralysis.

“I had spent years feeling sorry for myself,” he told news.com.au

“But then I met Christopher Reeve, who had been paralysed 12 months before, and after that meeting my life changed as I found some direction and was determined to find a cure.”

Mr Cross has been travelling to India since 2007 for treatment with controversial Indian doctor Geeta Shroff.

Admitting a cure for paralysis was some way off, Mr Cross said the stem cell therapy was his only hope of ever walking again and at the very least provided him with a better quality of life.

“My life expectancy was only 10 years, so every day is a blessing,” he said.

“I guess a lot of people may see me as a human guinea pig but I was never meant to live this long anyway so I’m grateful for every day and may as well roll the dice.”

Dr Shroff’s methods have been attacked by western scientists who are asking her to reveal her methods, but she refuses to open up her lab.

ABC journalist Sabour Bradley travelled with Mr Cross to India and told news.com.au he witnessed “miracle’s he couldn’t explain” when he was given access to her clinic.

“People’s attitude to stem cell therapy will be determined by whether they know someone in a position like Perry’s,” he told news.com.au.

“If you see someone you love suffer, of course you’ll try anything that gives you hope.”

Bradley said it was hard to determine if Dr Shroff’s techniques were legitimate as she kept her methods a closely guarded secret and was unwilling to have them analysed by western doctors.

“I either saw some things which can only be described as miracles, or her system just works,” he said.

“I saw paraplegics walk for the first time … it was impossible to explain.”

He agreed people with life-changing conditions such as Perry’s felt they had no other choice than to try a treatment not regulated in Australia.

“His goal is to walk again, his doctor (Shroff) believes he will and his family believe he will,” Bradley said.

Mr Cross said if stem cell treatment was available here, a cure could be closer than ever.

“I’ve questioned the methods myself sometimes, but a cure for paralysis needs a different approach,” he said.

In the meantime, Mr Cross is keeping busy living and working towards finding a cure.

He even takes part in marathons.

And not only did he set up the Perry Cross Spinal Research Foundation, which funds research projects and raises awareness about prevention of spinal cord injury, but he sits on several non-profit boards and is a regular public speaker.

“There’s never a dull moment,” he said, adding that many people with spinal injures don’t get out in public as regularly and were often forgotten.

“It’s been my motivation to get out there in front of people. I don’t hold back from going anywhere or doing anything.” he said.

“I’ll always be fairly flamboyant about it because I feel that if I don’t, then this situation will just drag on forever.”

Mr Cross isn’t alone in his search for a cure, which may seem years away.

The 29-year old dragracer from Sydney, who is about to get married but has just lost the sight in his eyes, admits he is putting his career and family life in jeopardy and will do anything to race again.

But when he arrives in India not all is as he thought it would be in his quest for a breakthrough that will push his body, ethics and bank account to the limit.

For the full story tune into Head First tonight at 8.30pm on ABC1.

IS IT WORTH BANKING YOUR BABY’S CORD BLOOD?