Where Are They Now- Mike Utley 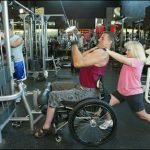 Mike Utley went deaf in his right ear while having dinner in January. He was robbed of equilibrium and made so sick he had to seek a doctor the next day. He traded partial hearing for a nonstop fire alarm that still reverberates in his head.

This was nothing more than piling on for the former Washington State and Detroit Lions football player, left a quadriplegic nearly 17 years ago when the offensive guard suffered a spinal cord injury while slammed to the ground on a pass-blocking play.

The latest setback was another reason for Utley to feel sorry for himself, though that never happened.

“I don’t take any prisoners,” he said. “I don’t put up with any crying or snibbling. I don’t have time for it.”

For the past decade, Utley, 42, has lived in Orondo, an out-of-the-way community that borders the Columbia River, sharing his three-bedroom waterfront home with his wife of six years, Dani. He remains resolute and hilarious, everything except hopeless.

His days are spent working out at his residence or at Gold’s Gym in nearby East Wenatchee, taking part in some unlikely new adventure such as fighter-plane combat re-enactment, and running his home-based Mike Utley Foundation that is dedicated to finding a cure for spinal cord injuries.

On Sept. 27, Utley again will host his annual fund-raiser, the DAM2DAM Thumbs Up! Bike Tour, gathering riders together at Lincoln Rock State Park on Highway 97, beginning at 7 a.m. (register online at www.mikeutley.org). He asks people for a minimum $250 donation yet turns no one away. He always has a surprise for this group, such as a past guest appearance by former Tour de France winner Greg LeMond.

“Mike Utley doesn’t wait for a cure; Mike Utley lives for one,” he said, referring to himself in the third person. “I will do what I have to do.”

This is not exactly what Utley envisioned when he left Seattle’s Kennedy High School for WSU, became an All-America player while lining up alongside former center and new Cougars coach Paul Wulff, and then headed for Detroit as a third-round draft choice banking on a 10-year NFL career.

Utley didn’t quite make it through three pro seasons. On Nov. 17, 1991, he was left paralyzed on the first play of the fourth quarter in a game against the Los Angeles Rams. He fractured three Vertebrae after getting shoved down while battling with defensive lineman David Rocker, someone Utley still confuses with Tracy Rocker. He was carried off the field on a stretcher, knowing it was bad but flashing a thumbs-up sign to the home crowd that has become his trademark.

“People ask if I remember and I see it all the time,” Utley said. “I was kicking the crap out of him. We were physically better than they were on that given Sunday. I got caught. He caught me and pulled me down. He was doing what he should have been doing. I would have done the same thing.

As the Lions advanced to the NFC Championship Game without him, Utley spent nine days in the intensive care unit at Detroit’s Henry Ford Hospital, was transferred out and suffered two blood clots, and returned to the ICU for another nine days. From there, he was moved to Denver’s Craig Hospital, considered one of the nation’s foremost spinal cord Rehabilitation centers.

Surely there were moments of frustration and despair for Utley. There also were times he had to be the carefree goofball he’d always been. Super Bowl Sunday, nine weeks after his crippling injury, comes to mind. Preparing to watch the game on TV from his hospital room, Utley had a revelation.

“I wanted something to drink,” he said. “They didn’t have one on tap.”

Utley snuck out of the hospital in a wheelchair, traveling four blocks to a 7-Eleven. He was wearing only shorts and a shirt in the brisk Colorado weather, and his 300-plus NFL frame was 105 pounds lighter, with his upper body resembling, in his words, “Pamela Anderson cleavage.”

Crossing a street, he got the wheels stuck on a curb and stayed there until a passing motorist jumped out of his car and gave him a push. Once inside the store, he had the clerk retrieve a 40-ounce beer and count out the money from his wallet in a backpack hanging behind him.

Back in his hospital room, Utley needed an hour and half to get the beer open. His hands and wrists weren’t strong enough to make this happen at the time, forcing him to put the container up against his body and squeeze. He finally sipped that beer while watching former WSU quarterback and teammate Mark Rypien lead the Washington Redskins to a 37-24 victory over the Buffalo Bills. He felt a great sense of accomplishment.

He stayed in Colorado for six years learning how to become independent again before choosing to move home. His wanted a water view. He had to be selective to fit his needs.

“I’m not a big ocean guy, but I love lakes and rivers; they’re very calming,” Utley said. “Lake Washington was too crowded. Lake Sammamish was too small for the powerboat I wanted. People talked about Lake Chelan, but the access was too steep.”

He bought a rambler on 2 1/2 acres in Orondo from the parents of friends. He has two docks, which he says is rare for the Columbia River, and a hydraulic lift to put his 25-foot boat in the water. His place resembled a bachelor pad until he met his wife, a former paramedic, while working out.

Utley, who still has the same mullet haircut, has fought and won insurance battles with more expected. He has raised nearly $4 million for spinal cord injury research. He makes himself available to counsel other quadriplegics and their families. He travels and speaks to groups around the country. He allows people in his home to follow him around and see how he manages.

Nine years ago, he stood up and moved his feet. He didn’t exactly walk, but he showed what Biofeedback and exercise could do, allowing him to rebuild neuro-signals and make his back and hips stronger to give him more functionality. His shoulders are NFL-sized from working out. He weighs about 245. He’s big on nutrition. He could do better.

Utley drives a Cadillac Escalade SUV with special hand controls. He uses a wheelchair with mountain bike tires for more cushion. He has a lockdown seat in his boat. He has sky-dived and skin-dived. He’s always up for an adventure, spending his sixth wedding anniversary with his wife in California 5,000 feet in the air in separate mock warplanes shooting at each other.

“I love living,” he said. “When I first got hurt, I couldn’t fight myself out of a wet paper bag.”

Utley pushes ahead, keeping a positive outlook even with the suicide nine years ago of his older brother, Tom. As basketball players at Kennedy High, they resembled the hockey-playing Hanson brothers of cinematic fame, barreling into opponents and causing all sorts of mayhem.

He maintains a serious football interest as a WSU season-ticket holder. He’ll be in the stands for Saturday’s opener against Oklahoma State at Qwest Field. He’s confident the highly disciplined Wulff will restore the program to something a lot more competitive.

Utley attended Super Bowl XL between the Pittsburgh Steelers and Seahawks at Detroit’s newer Ford Field. His dream remains to someday return to the since-abandoned Silverdome, to the spot he was injured, and walk again.

Meantime, he must deal with that incessant buzzing in his right ear. He will continue to mix work and play in heavy doses. He won’t consider doing it any other way.

“The bottom line is what I give to myself I will get back,” Utley said. “If I cheat myself, it’s over.”

Things looking up for wheelchair-bound 10-year-old