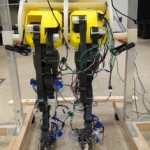 A group of US researchers has produced a robotic set of legs which they believe is the first to fully model walking in a biologically accurate manner.

A group of US researchers has produced a robotic set of legs which they believe is the first to fully model walking in a biologically accurate manner.

The neural architecture, musculoskeletal architecture and sensory feedback pathways in humans have been simplified and built into the robot, giving it a remarkably human-like walking gait that can be viewed in this video:

The biological accuracy of this robot, which has been presented today, Friday 6 July, in IOP Publishing’s Journal of Neural Engineering, has allowed the researchers to investigate the processes underlying walking in humans and may bolster theories of how babies learn to walk, as well as helping to understand how spinal-cord-injury patients can recover the ability to walk.

A key component of the human walking system is the central pattern generator (CPG). The CPG is a neural network in the lumbar region of the spinal cord that generates rhythmic muscle signals. The CPG produces, and then controls, these signals by gathering information from different parts of the body that are responding to the environment. This is what allows people to walk without needing to think about it.

The simplest form of a CPG is a half-centre, which consists of just two neurons that fire signals alternatively, producing a rhythm. The robot contains an artificial half-centre as well as sensors that deliver information back to the half-centre, including load sensors that sense force in the limb when the leg is pressed against a stepping surface.

Co-author of the study, Dr Theresa Klein, said: “Interestingly, we were able to produce a walking gait, without balance, which mimicked human walking with only a simple half-centre controlling the hips and a set of reflex responses controlling the lower limb.”

The researchers, from the University of Arizona, hypothesize that babies start off with a simple half-centre, similar to the one developed in this robot, and over time they ‘learn’ a network for a more complex walking pattern. This could explain why babies have been seen to exhibit a simple walking pattern when placed on a treadmill even before they have learnt to walk – a simple half-centre is already in place.

“This underlying network may also form the core of the CPG and may explain how people with spinal cord injuries can regain walking ability if properly stimulated in the months after the injury,” Dr Klein continued.

Facebook
Twitter
Email
Mix
Digg
Previous articleBritish GP: Mark and Seb unveil Wings for Life cars
Next articleZina Hermez – “Disability is a condition, it’s not who we are. Diagnosis is a prediction, it doesn’t have to determine our outcome.”

Alternative therapy could be the next step for those with spinal...