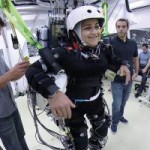 “I FELT the ball!” yelled Juliano Pinto as he kicked off the Football World Cup in Brazil last year. Pinto, aged 29 at the time, lost the use of his lower body after a car accident in 2006. “It was the most moving moment,” says Miguel Nicolelis at Duke University in North Carolina, head of the Walk Again Project, which developed the thought-controlled exoskeleton that enabled Pinto to make his kick.

Since November 2013, Nicolelis and his team have been training Pinto and seven other people with similar injuries to use the exoskeleton – a robotic device that encases the limbs and converts brain signals into movement.

The device also feeds sensory information to its wearer, which seems to have partially reawakened their nervous system. When Nicolelis reassessed his volunteers after a year of training, he found that all eight people had regained sensations and the ability to move muscles in their once-paralysed limbs.

“Nobody expected it at all,” says Nicolelis, who presented the results at the Brain Forum in Lausanne, Switzerland, on 31 March. “When we first saw the level of recovery, there was not a single person in the room with a dry eye.”

When a person’s spinal cord is injured, the connection between body and brain can be damaged, leaving them unable to feel or move parts of their body. If a few spinal nerves remain, people can sometimes regain control over their limbs, although this can involve years of rehabilitation.

But the odds of recovery are slashed for people diagnosed with a complete spinal cord injury, in which the nerves are thought to be severed. This results in no feeling below the site of the injury. People can spend a lifetime feeling disconnected from their lower body, and tend to receive less physical therapy as a result. Just over a third of the 12,500 people who experience a spinal cord injury every year in the US have complete injuries.

The Walk Again Project’s results suggest that rehabilitation with an exoskeleton might offer a better future. Developed by a team of 156 people spanning the globe, the device reads the wearer’s brain activity using an electrode cap. Activity patterns associated with the wearer’s intention to move are translated into an electrical signal that moves the legs of the exoskeleton, allowing the person to walk.

The exoskeleton has another important feature: it provides tactile feedback to the wearer. A flexible bed of temperature, pressure and proximity sensors – what the team calls an artificial skin – lines the sole of each foot. When the wearer takes a step, a signal is relayed to their forearm, which is still able to feel sensations. “You are driving the exoskeleton by thinking about what you want to do, and you are getting instantaneous feedback from the surface on how you’re walking and how you’re moving in space,” says Nicolelis.

Seven of Nicolelis’s eight volunteers have complete spinal cord injuries. At the start of the training, all eight said they felt disconnected from their lower body, and were unable to even imagine moving their paralysed body parts. But after 1100 hours of training, everyone said they felt a sense of ownership over their limbs. “They felt that they had legs again,” says Nicolelis. “They can actually feel that they are touching the ground and moving their legs.”

But what really startled the team was that everyone showed signs of functional recovery. “In every patient we saw an improvement in tactile sensation,” says Nicolelis. Some people could feel regions of their body seven vertebrae below their spinal cord injury, and everyone could voluntarily move muscles in their lower limbs.

The greatest improvement was in a woman who had received a complete spinal cord injury 13 years ago. After a year of training, she could feel sensations below her injury, and, when supported in a harness, could make leg movements associated with walking.

While the individuals are still some way from being able to support their own weight and walk unaided, their level of improvement is “dumbfounding”, says Sukhvinder Kalsi-Ryan, a physiotherapist at the University Health Network in Toronto, Canada, who trials therapies for people with spinal cord injuries. “This is the most extreme recovery I’ve ever seen,” says Kalsi-Ryan. “What Nicolelis has done is phenomenal – the patients are much closer to normal human movement.” The results are more impressive because they were seen in all eight people, she adds.

“These are important observations,” says Lee Miller, who is developing thought-controlled prostheses in monkeys at Northwestern University in Chicago. “But it’s important to temper the excitement with the recognition that it will be a long road before patients could begin to think of being able to walk independently again.”

No one is sure how tactile feedback is triggering recovery. “One of the most important factors in rehabilitation is mimicking normal stimulation,” says Kalsi-Ryan. When nerves and other cells aren’t used, they shrink and atrophy. “Things just stop working,” she says. The feedback from the exoskeleton’s artificial skin may trick nerve cells into reactivating and regrowing. “They have created the closest thing to a human experience,” she says.

It is also unclear how people with complete injuries were able to recover to the extent observed. “Although diagnosed as having a complete injury, there must be some small remaining connection there,” says Miller. Nicolelis agrees, and argues that people with complete spinal cord injuries shouldn’t be written off in terms of recovery. “Our results suggest that we should offer rich physical therapy no matter what the original diagnosis,” he says.

The Walk Again exoskeleton is still only a prototype. The group is developing a slim-line, affordable version, and is training more people with spinal cord injuries. The wearers don’t seem to mind the clunky prototype – one asked to borrow it so he could walk down the aisle at his wedding.

Nicolelis hopes the exoskeleton could exist alongside the robotic walkers already found in many rehabilitation centres. Kalsi-Ryan says she can see the exoskeleton being more widely used for people with spinal cord injuries. “It will take a good 10 years, but I do think these things will become part of our future,” she says.

This article appeared in print under the headline “Paralysed limbs reawoken”

Get up and go

Exoskeletons aren’t the only way of getting people with spinal cord injuries back on their feet.

In 2012, a team at the University of Louisville in Kentucky saw impressive results when they implanted electrodes directly into the spinal cord of a paralysed man, enabling him to stand. After using the implant for seven months, he was able to move his leg and ankle.

Last year, a Polish man with an apparent complete spinal cord injury regained the ability to walk with a frame following an injection of neural stem cells into his spinal cord. However, many scientists remain unconvinced that his recovery had anything to do with the transplant – it may have been down to the intense physical therapy he received, they say.

Electrically stimulating muscles while zapping people’s brains with magnetic fields improves muscle activity and dexterity in people with incomplete spinal cord injuries. The simultaneous stimulation mimics communication between the limbs and the brain. The approach isn’t an option for people with complete spinal injuries as they wouldn’t be able to feel the muscle stimulation.

Back on her feet