Prosthetics Are Telling Paralyzed Legs How to Walk Again 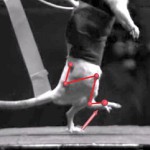 Neural prosthetics are getting so good that they can now automatically trigger natural movements in the legs. In a new experiment with paralyzed rats, scientists sent electrical signals to the spinal cord to mimic signals from the brain that could no long reach the limbs. This kind of research could lead to robot-assisted rehabilitation to help people with partial damage to their spinal cords learn to walk again.

Spinal cord injuries can cause paralysis by damaging the brain’s connections to the legs, and so direct electrical stimulation is one way in which scientists are striving to help patients overcome spinal cord injuries. Recently, four young paraplegic men who were paralyzed for years voluntarily moved their hips, ankles and toes with the aid of such epidural electrical stimulation (EES).

A problem with EES, however, is that researchers needed to constantly monitor and manually adjust the strength, duration, and frequency of the electrical pulses. In the new study on rats, published in the journal Science Translational Medicine, scientists have developed an EES system that adjusts the electrical pulses it delivers automatically.

The researchers experimented with rats whose spinal cords were completely severed in the middle of their backs. The rodents were tested with a robotic device that supported the animals so they could walk on a treadmill and up stairs. The neuroscientists surgically implanted flexible electrodes in the rats that could stimulate the lower spinal cord. They also gave the rodents drugs that excited neurons in their spinal cords, preparing them to coordinate lower body movements.

Walking, however, is a surprisingly complicated maneuver—to make it work, the researchers had to get the jolts just right. The investigators discovered a direct relationship between the frequency of electrical stimulation and how high rats lifted their limbs. Using this finding, they designed a way to monitor the gaits of the rodents and, using this data, automatically fine-tuned the electrical stimulation the rats got in real time to better control their locomotion.

The rats walked more than 1,000 steps without failure, and could also climb staircases of various heights and lengths with fluid movements. “We can very precisely control foot trajectories for more natural movements,” says study co-author Grégoire Courtine, a neuroscientist at the Swiss Federal Institute of Technology in Lausanne.

One potential application of this system is robot-assisted rehabilitation, where patients with partial damage to their spinal cords might learn to walk again by training in a larger version of the experimental apparatus that Courtine and his colleagues used in this study. “In 2012, we found such training could unexpectedly promote the growth of nerve fibers to help paralyzed rats walk again,” Courtine says.

What about patients whose spinal cords have been completely severed? “We could imagine spinal cord stimulators that directly receive signals from the brain and stimulate the part of the spinal cord the brain is no longer connected,” Courtine says. “The hope is this could help people move their legs to stand or walk.”

Stand Together to End Paralysis Now!

Disabled vets get hot wheels despite their wheelchairs