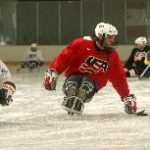 For Taylor Chace, it was an accident in a hockey game when he was 16; an accident that left him with a shattered lower back, a traumatic spinal cord injury that permanently affected the use of both legs.

For Jon Parker, it was an accident in a ski race during high school at Vermont’s Burke Academy that led to him losing his leg.

Ted Broderick and Josh Moran were born with it. Broderick, a congenital amputee, is missing his right forearm. Moran was born with missing a bone in his left leg and a fused right elbow, as well as being growth hormone deficient.

They’re disabled, but they’re also elite student-athletes at UNH. They are recognized varsity athletes. They often workout with their able-bodied counterparts. They’re not letting their disabilities get in the way of their competitive drive.

“I think some people, when they think of disabled sports, they think, ‘Awww, it’s nice they get to do something,'” said Chace, who plays for the UNH sled hockey team. “But when you look at Team USA or Canada [sled hockey teams], they’re out there to win the gold medal.”

Disabled students on campus are given the opportunity to compete for titles of their own thanks to Northeast Passage.

According to the program’s website, the mission of Northeast Passage “is to create an environment where individuals with disabilities can recreate with the same freedom of choice, quality of life, and independence as their non-disabled peers.”

Offering competitive sports for disabled students is one aspect of the Northeast Passage program. What makes the program unique is that disabled athletes are integrated with traditional athletes whenever possible, according to Tom Carr, assistant director of Northeast Passage.

“I don’t feel these groups need to be segregated,” said Carr.

Carr said other schools offer traditional sports for disabled athletes, but they are kept separate from varsity athletes. The University of Illinois, which has one of the largest programs for disabled athletes in the nation, is one such example. Northeast Passage is also unique in its focus on winter sports, particularly sled hockey.

However, the Northeast Passage program and their disabilities aren’t the only things that link these young men together – they share common aspirations as well. All four hope to compete in the upcoming Paralympic Games.

Chace, a junior kinesiology major, has already competed in the Paralympics, as a member of the U.S. National Team in the 2006 Games in Torino, Italy. Chace and his teammate Moran hope to make the trip to Vancouver for the 2010 Games.

Parker and Broderick, alpine skiers on the UNH ski team, are both looking further ahead and farther away. They hope to compete in the 2014 Games in Sochi, Russia.

All four have accumulated impressive accomplishments already, and overcome the trials associated with their disabilities.

In sled hockey, instead of wearing skates on their feet, athletes sit on a metal frame resembling a sled that has two skate blades mounted underneath it. They carry two sticks that have metal teeth on the bottom, which they use to propel themselves forward, and a normal hockey blade on the other end.

Chace made the cut for the Torino Games when he was just a couple of years into the sport, and helped the United States come home with the bronze medal. He is currently on the National Team and has traveled around the world, playing games in Japan and Germany, and, soon, the Czech Republic.

Moran, a sophomore studying electrical engineering, has also been on the U.S. National Team and Junior National Team, of which he was a captain for several years.

He has been on the winning team at the Disabled Festival, which was held on the final weekend over spring break and is considered the national championship of the sport, for five years in a row. Now he’s preparing for the 2010 Olympic team tryouts this summer.

“I’ll hopefully be making a trip to Vancouver,” he said.

Parker, like Chace, quickly made the transition after his accident. He tried one-legged skiing for the first time the same winter as his accident. Then, the next winter decided to take it up seriously.

One-legged skiing is allowing him to continue dreams he had before the accident, when he went to the Junior Olympics.

“I’ve always had a goal of being in the Olympics, and it just went over to the Paralympics when I lost my leg,” said Parker, a freshman business major.

Broderick, a freshman business major, has been racing for three years. He was captain of his high school ski team in Amherst, and won the Eastern Championships two years in a row. This past weekend, he competed in the U.S. Alpine Nationals, held in Winter Park, Col.

Broderick knows what it will take to reach the Paralympics, even though the 2014 games are still five years off.

“More than anything, it’s going to take mileage. You’re going to have to ski a lot,” he said, also listing weight training and cross training as key components.

Carr, who is also the coach of the sled hockey team, said all four athletes have a “more than realistic” chance of making it to the Paralympics.

Northeast Passage has been key in recruiting additional disabled athletes to UNH. Parker and Broderick both say the program was an instrumental factor in their decision to attend UNH.

Moran hopes recruitment will be high enough that the sled hockey team will soon be fully composed of UNH students. Currently, the team also includes members of the surrounding community, since there aren’t enough student athletes.

But getting athletes to come to UNH isn’t just good for the teams. Carr, who takes the “student” part of “student-athlete” seriously, is as concerned that disabled athletes get an education as he is about winning.

“There aren’t really professional disabled sports,” said Carr. “For all of these guys, getting a college education is the most important thing.”

What the athletes wouldn’t mind is a little more exposure for their respective sports, and a realization that they’re working just as hard as the traditional teams on campus.

“The handicap of the sport is the mindset of people looking at it,” said Chace. “That’s really what makes it a handicapped sport. I’m excited for the future for disabled students coming up the ladder.”

By: Thomas Gounley
The New Hampshire