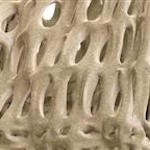 People paralysed by spinal cord injuries lose mechanical strength in their leg bones faster, and more significantly, than previously believed, putting them at greater risk for fractures from minor stresses, according to a study* published in the Journal of Bone and Mineral Research.

The findings suggest that therapies to maintain bone mass and strength in patients with spinal cord injury need to be commenced sooner and that doctors treating patients with osteoporosis need to think beyond the standard bone density test when assessing risks of hip and other fractures.

US researchers analysed data from 13 spinal cord injury patients treated at the Rehabilitation Institute of Chicago in the US. Each patient received two standard scans (a DEXA bone mineral density scan and a CT scan) of their leg bones at specified time intervals for nearly four months after the original injury. The team then used computer modelling to predict how the amount and distribution of bone loss would affect the ability to sustain mechanical loads and movements.

The results showed that patients lost 2 per cent of their leg bone mass each month, yet that correlated with a 6.9 per cent loss in leg bone strength. Karen Troy, assistant professor of biomedical engineering at Worcester Polytechnic Institute (WPI) in Massachusetts, said: “In just 3.5 months, reductions in strength for some patients were on the order of that predicted for lifetime declines owing to aging.”

Professor Troy emphasised that starting therapies early to maintain bone mass and strength was important, not only to prevent injuries but also to keep the patients eligible for treatments and technologies now in development. “In ten or fifteen years, with advances in tissue regeneration to repair the spinal cord, and exoskeleton assist devices, many of these people will have the opportunity to get back on their feet, if their bones are strong enough to carry the load,” she said. “It’s very difficult to restore bone mass once it’s lost, so the better approach is to prevent the loss in the first place.”

The three-fold difference observed in bone mechanical strength versus density “doesn’t tell the whole story,” Professor Troy warned. “It’s not just a question of how much bone mass is lost, but where that loss is occurring. We found that bone loss occurred sooner in mechanically important areas and significantly increased the risk of fracture.”