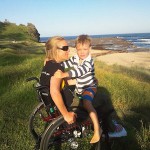 Panic instantly set in when Sarah-Jane Staszak woke up in her hospital bed and found she couldn’t move.

The 40-year-old mother from Blackheath in Sydney’s Blue Mountains had gone to the Royal North Shore Hospital in November last year to relieve the pressure from a herniated disc in her back that left her with intense nerve pain in her left arm.

Mrs Staszak had damaged the disc while carrying some heavy ropes before an abseil and, after experiencing pain that she described as ‘up there with child birth,’ she signed herself up for a laminectomy – a common back surgery.

‘When I woke up I had a registrar standing above me saying the surgery went well, but I couldn’t move. He wanted me to wiggle my toes and I couldn’t – I was paralysed from the C5 down,’ Mrs Staszak told Daily Mail Australia.

‘I couldn’t lift my arms and obviously started to panic so they sedated me and took me to have an emergency MRI which is when they discovered there was a big haemorrhage on my spinal cord at the C5 vertebrae and that was causing damage to the nerves and obstructing all the signals from getting through.’

The former outdoor recreation teacher at Tafe NSW spent the next six days in the intensive care unit, then another six weeks in hospital followed by seven months at a rehabilitation facility before she was released in August this year.

‘Initially I was in a lot of denial – they pumped me up on steroids thinking it would settle down and calm itself down, but it was certainly not a pleasant experience,’ Mrs Staszak said.

‘I struggled with my mental health more than anything for the majority of the time, so it was difficult to get on to the physical rehab side of things.

‘Now, I’m getting a little bit of movement in my legs and I’m able to stand with a standing frame but I suffer from the high end of tone and spasticity in my muscles – my body gets very rigid and I get a lot of spasms.

I’m able to move my arms but also have a lot of tone and spasticity in my triceps which prevents them from bending and I have next to no hand function.’

An avid adventurer who was constantly skiing, rock climbing, abseiling and canyoning and has cycled around the whole of Australia, Mrs Staszak said the hardest thing about her current condition is her inability to care for her five-year-old son Hamish.

Describing him as a very active, supportive and helpful little boy whom she taught to ski at only two, Mrs Staszak said it was not possible for her to care for Hamish as she depends on carers and friends for their constant support.

‘The biggest emotional trauma to deal with is the loss of a relationship and all things I used to be able to do with him,’ she said.

With no way of ascertaining how much improvement there will be in her ability to move independently, she is trying to raise $300,000 to attend an intensive spinal rehabilitation program in December that she says is only available in the United States.

The program will see her training five days a week for between three to six months starting with the most innovative equipment.

She also hopes to modify her home with necessary aids and buy a car that allows her to remain as independent as possible and, one day, care for her son again.

Until then, Mrs Staszak said she is trying to stay motivated with the help of the wide group of friends and family that have rallied around her.

‘The best case scenario is that I’ll hopefully be able to walk again and get the use of my hands back,’ she said.