Margaret Romph, 5, will be transferring to facility in Maryland 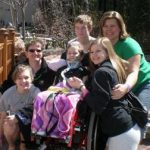 A car accident left the youngest, 5-year-old Margaret, with severe injuries, including an injury to her spinal cord that has left her in a wheelchair.

Nearly three months after the accident, Margaret now is undergoing therapy at Ranken Jordan, a pediatric specialty hospital in Maryland Heights, where she was transferred from the University of Missouri-Columbia Hospital Feb. 16.

“She was as stable as the hospital could have gotten her,” said Margaret’s mother, Sherline. “She was ready for the rehab portion of our journey.”

“She has good days and bad days. We are trying to figure out a way to get her to cooperate more often,” Sherline said. “I would say cognitively she is doing great. She is doing great talking and verbalizing even though she has no voice. She is responding very well to the electric stimulation and the tilt table.”

The tilt table is used to help with balance and determine why she feels as though she is falling. The electric stimulation is used in physical therapy to try to encourage her muscles to begin to react to the pulses.

Since Margaret has undergone more testing, the family has received more definitive answers, but some questions cannot yet be fully answered.

“We have had a fluoroscopy (medical imaging that shows a continuous x-ray image) and it showed that Margaret is not breathing on her own, which is very disappointing,” Sherline said. “They are not saying that will be forever, but it is for right now.”

“In the next few weeks we are going to be transferring Margaret to Kennedy Krieger Institution in Baltimore, Maryland,” Sherline said. “They are a spinal cord injury hospital. That is all they deal with so we are excited about the move. They are so advanced there.”

Looking into the family’s future is something the Romphs have been and always are doing.

Sherline says they have no idea when Margaret will be coming home, but they have already begun preparations at their home for her return.

Constructions has begun, but that would not be possible without help, Sherline said.

The estimated cost for renovations to their home are about $105,000.

Throughout their fourmonth ordeal their family says they have been amazed by the outpouring of community support, which seems to be never-ending.

Renovations to the home are not the only concern of the family, although throughout the experience Sherline said she feels she simply prays and God and the community handle the rest.

“They (the community) are taking care of our family,” Sherline said.

In a collaborative effort to help the Romph Family, the Jefferson City Police Department, the Cole County Sheriff’s Department and the Missouri Highway Patrol, Troop F, are teaming up for a fundraiser – Tip-A-Cop, from 4-8 p.m. Wednesday and Thursday at Longhorn Steakhouse.

During the time, two or three representatives of each agency will be greeting customers and raising awareness about Margaret’s condition, and collection donations for the family. Longhorn will also donate 10 percent of sales during that time to the family.

Swims wash away depths of despair for paralyzed Mexico man

For more than 30 years, A-1 Scuba and Craig Hospital have...