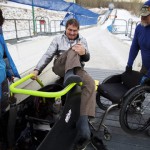 TORONTO — When Lonnie Bissonnette flips his wheelchair, whether it’s misjudging a step bouncing down a flight of stairs or landing hard after parachuting off the roof of a building — equally likely scenarios for this independent, thrill-seeker — he always does the same thing.

He laughs, hauls himself back into his chair, and grins at anyone who happens to be watching. Rough and tumble mishaps are routine for Bissonnette who was paralyzed in 2004 after an accident jumping off a bridge with a parachute strapped to his back.

But when Bissonnette flips his bobsled on the ice track at the Canada Olympic Park in Calgary, it’s entirely different.

He hangs his head low and beats himself up over his mistake — a slightly too aggressive line on Corner 6, as it turned out in his last race two months ago.

That’s because the 49-year-old from St. Catharines is part of a small group of pioneers trying to prove that para-bobsled should be included in the Paralympic Games. He wants to showcase the athletic skill of this nascent sport, not the cringe factor of potentially dangerous accidents at 120 km/h.

“It’s the whole image thing, you can’t have someone hurt come out and get hurt more.”

“I hate to use the word discrimination, but resistance for sure and skepticism,” he said. “When we began it, people were thinking of the limitations not the abilities.”

There’s been controversy over equipment — the governing body opted to move forward with a single-seat mono-bobsled, rather than the more familiar two-man sleds used by able-bodied athletes — scarcity of funding, insufficient track time and cancelled races.

But, finally, the sport seems to be getting some traction. After three years of training and competition, Bissonnette, Edmonton’s Brian McPherson and a handful of others will compete Jan. 18-23 in the first ever para-bobsled World Cup in Igls, Austria.

“We’re just as equal to our able-bodied counterparts,” said McPherson, who was the top para-bobsled pilot last season.

“It’s just a question of opening the doors and making society aware that we’re not different than everybody else, we just sit a few feet shorter and a little crazier.”

At their last race, in Calgary this past November, and those before it, Bissonnette and McPherson have been piloting adapted two-man sleds down the track. They start seated in the sled with an able-bodied brakeman pushing the sled over the crest at the start.

But at the Igls World Cup and future international competitions they’ll be solo in a mono-bobsled. Officials will release the sleds at the crest but a system enabling athletes to start using the physical abilities they have is being designed, Kurtz said.

Eventually, there will be a separate class for ambulatory athletes who will push start their bobsleds before jumping in.

Kurtz and others are hoping para-bobsled and para-skeleton, which had its first World Cup in Park City, Utah, in November, will be included as demonstration sports in the 2018 Paralympics in Pyeongchang, South Korea and gain official status for the ’22 Games.

Para-athletes struggle to gain the same attention their able-bodied counterparts get and amateur athletes of all stripes struggle to get even a fraction of the attention afforded to those in major North American pro sports.

But for Bissonnette, para-bobsled is already far more mainstream than what he’s used to doing: jumping off buildings and bridges around the world.

BASE jumping is on the very edge of sport. In fact, more people think it’s madness than sport. It’s for thrill-seekers who think parachuting is too tame and are willing to overlook the high injury rate and death toll that comes from leaping off structures with only seconds to sort out a safe landing.

BASE is an acronym for the four structures they jump from — buildings, antennas, spans (bridges) and earth (cliffs).

Bissonnette was left an incomplete quadriplegic after hitting the water under a bridge in Twin Falls, Idaho at 115 km/h when his leg was caught in his parachute and it didn’t open properly. Far from giving up the sport, he stepped it up another level by continuing to BASE jump, strapped in his wheelchair.

“For me, bobsled is something new but I can draw similarities to BASE,” Bissonnette said. “There’s this super high adrenalin that goes with it but also the fact that you absolutely have to remain calm during the run.”

A bobsled doesn’t have a steering wheel, pilots steer with a pulley system and a good steer is often just the smallest twitch of a finger.

“To be able to focus enough to do that while you’re flying down the track and getting bounced around, to remain calm and make little movements like that is a great challenge,” he said.

But sport is now more than just a personal challenge for Bissonnette.

What started as a desire to continue his life and not be beaten by a wheelchair has turned into a broader purpose to show the world, and newly injured people in particular, that life doesn’t end.

“You don’t have to sit at home on your couch and play video games or go play wheelchair tennis, there’s much more,” he said.

“You can still do some crazy fun stuff.”