NCSU study gets paralyzed pooches back on their feet 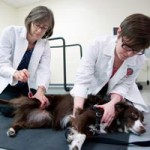 RALEIGH One paralyzed dog even got its wag back.

The new study at N.C. State University, though, was mainly to see if two experimental drugs could help dogs with spinal cord injuries regain the use of their hind legs, something that may have implications for injured humans, too. Three did, with dramatic – if imperfect – improvement in their ability to walk.

The study, which was published last week in the online journal PLOS ONE, includes a short video clip of one of the trio on a treadmill before and after getting one of the drugs.

The dog had been paralyzed for a long time, said Natasha Olby, professor of neurology at NCSU’s College of Veterinary Medicine, who led the study.

“You could put him on the treadmill, and he may try to move his legs a bit, but basically he drags,” she said. “Then you give him one of the drugs, and 30 minutes to an hour later, he can actually step independently with no support. So it’s a pretty dramatic response.”

There were 19 dogs in the study initially – all of them local – though six dropped out for various reasons. Three had the dramatic improvements, some had essentially no response and another group improved slightly but not enough to get up and walk, Olby said.

“We got a very, very variable response,” she said. “The point being if we can identify what will predict a response to this drug, then we can target therapy to the most appropriate patient population.”

The dog study examined the effects of a drug called 4-Aminopyridine (4-AP) and a derivative of it, t-butyl. The drug 4-AP has been shown to boost walking ability in people with multiple sclerosis. It also showed promise in small tests of people with spinal injuries, but then in major large study showed no significant benefit, Olby said.

She and the other researchers are now trying to recruit a much larger group of injured dogs to try to determine what it was about the injuries that led to the differing improvements in their study. The answers could lead to individualized approaches to treating the injuries in dogs, and suggest further research in humans.

One theory, Olby said, is that the drugs may work on certain variations of spinal injury but not in enough cases to have shown up clearly in the large human study.

In the dog study, all the animals received each drug for two weeks, with a placebo for two weeks in between to allow the first drug to wash out of their systems. Both drugs seemed equally effective, Olby said.

The theory behind how the drugs work, Olby said, is that in some cases spinal cord connections remain, but the protective sheath around them is damaged. The drugs allow the connections to transmit information again despite the missing sheaths.

Some of the dogs in the study had suffered a traumatic injury, such as being hit by a car. Others had premature spinal degeneration that resulted in a dramatically damaged disc, something that’s common in certain breeds such as dachshunds.

Seven of the dogs belonged to that breed. The others included a shih tzu, Pekingese, corgi, a Labrador retriever and two Dobermans.

All had injuries roughly in the middle of their backs and had been properly treated when first injured but had not recovered use of their rear legs.

Serious spinal injuries aren’t unusual among dogs; Olby said that her office operates on about five such cases a week, on average.

Typically those whose rear legs are paralyzed suffer other effects, she said, including loss of control over their bowels and inability to urinate without help. Owners help them urinate several times a day by pressing each side of their stomachs.

They also can no longer voluntarily wag to express themselves, though they do wave their tails involuntarily as a reflex.

“If you pinched their toe they might wag, but it’s not the happy, voluntary wag of like, ‘Here’s your dinner’ or ‘I’ve come home,’ ” Olby said.

According to the study, four owners reported some improvement in voluntary wagging while their dogs were on one of the drugs.

The value of expressive wagging as part of normal interaction with a dog is huge for many owners, Olby said.

In fact, the owners of one dog were so overcome when its wag returned that they decided to keep paying for the drug, even though their dog wasn’t one that had regained the ability to walk while using it.

“When it wagged, it was just such a joyful moment for them,” Olby said.