Spinal injury hasn’t held him back from life 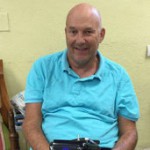 At Harriton High School in Lower Merion, Joe Dillon avoided the party crowd. But after a girlfriend broke his heart, his buddies talked him into drinking. On the night of August 9, 1976, Dillon, then 21, was drunk when he decided to dive off a wall into the bay at Somers Point, N.J.

He dove 13 feet – into what turned out to be 18 inches of water, shattering his fourth cervical vertebra into splinters. His head was attached to his body by only his spinal cord and ligaments.

At the hospital, he was put into traction, and for the first six weeks, all he could do was wiggle his shoulders. A breakthrough was being able to move his right index finger.

One day he worked up the nerve to ask his neurologist about his prognosis. Would he ever be able to play tennis again? The doctor illustrated his chances with his index finger and thumb. The gap between the two was about an eighth of an inch.

“That’s me,” Dillon remembers thinking. “That little space between his fingers is where I have a chance of recovering. I’m going to be that gap.”

When he began rehab, his arms and hands were so weak, he couldn’t maneuver a wheelchair. But after many months of diligent exercise and practice, he learned to move about by using underarm crutches strapped to his forearms with Velcro.

Dillon was always skillful with his hands. He had a gift for mechanics and carpentry. He earned spending money as a teen by buying old cars, fixing them up and selling them for twice what he paid. After college, when he saw ads in the Wall Street Journal for private jets, he joined companies in Washington and Fort Lauderdale that bought, sold, and serviced used jets.

Then, lured north by the glamour of New York, he joined Fortune magazine, where he covered, among other things, the corporate aviation industry before switching to the advertising department on the business side. He had an unlimited expense account and traveled widely, but because of his lingering paralysis, it took him 10 minutes to put his socks on every morning.

The pivot point in his career came after he returned to Pennsylvania and bought a house in Rosemont that was built in 1952 by the architect of Lankenau Medical Center. It was passive solar, and as Dillon began perfecting it with glass, wood, and metal improvements that represented “a fusion of cool furniture and green design,” friends commented on his eye for design. His girlfriend, with a Ph.D. in art history, told him that his work had transcended remodeling and entered the realm of art.

Encouraged, Dillon began making spin art, dropping paint on spinning surfaces. His “canvas” wasn’t paper or cardboard but four-by-eight-foot sheets of pegboard. He devised a machine to rotate these pieces at high speed and a suspended contraption that enables him to bombard them with large quantities of multicolored paint.

“It’s overkill,” Dillon says. “But I can make all the gigantic spin art I want.”

There is a message to his madness: An admirer of artistic rebels such as Bruegel and Duchamp, who were “not afraid to speak truth to power,” Dillon frets about overpopulation.

“If we don’t reduce the population, I think we’re doomed. I don’t think science can pull us out of it. It’s going to take a miracle to turn around apocalyptic global warming.”

In a four-by-eight sheet of pegboard, there are 4,608 holes, Dillon says. Plenty of paint goes down those holes, and to Dillon each represents an individual on a grid, both literal and metaphoric. Some consume no paint. Some consume a little. Others drain paint like a sump well. We Americans are clearly in the latter camp, Dillon says, but the industrializing Third World, empowered by spreading technology, is rapidly catching up.

The current motif of his paintings is elephants, as in “the elephant in the room.”

“Everybody likes a cute elephant, but these elephants represent the fact that no one wants to talk about overpopulation and global warming.” These subjects are “buzzkill,” Dillon says, guaranteed to render one a pariah at any cocktail party.

At 59, Dillon is still growing. He is applying to Yale, where he hopes to earn an M.F.A. His handicap (a word he endorses) has not diminished his zest for romance. A bachelor, he wants to have a child someday because he believes he’d be a good father. But, in observance of the world’s plight, only one.

Art Carey, For The Inquirer